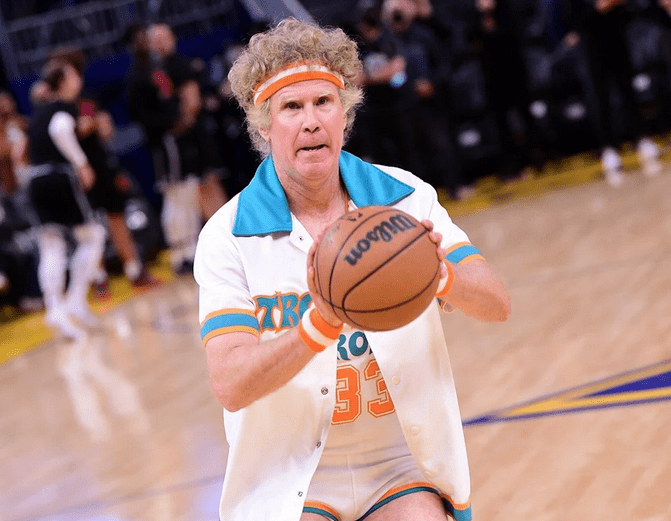 After five straight losses, the Golden State Warriors finally got back in the win column with a little help from actor Will Ferrell.

Dressed as his character Jackie Moon from the 2008 film “Semi-Pro,” Ferrell joined the Warriors during warmups before their game against the Los Angeles Clippers at Chase Center.

The Flint Tropics star provided some much-needed comic relief for the struggling Dubs, who went on to defeat the Clippers 112-97.

“It was fun, and I’m glad we took advantage of it,” Stephen Curry said. “I think we fed off the energy. I was actually surprised, his form, he actually had some good rotation on the ball and endless energy.”

“When I had some dark days, I would put that movie on, and it would make me smile. I’m very thankful for that film,” said Klay Thompson, who rejoined the team after sitting out two years with back-to-back injuries. “That was so cool. Dreams do come true.”

Despite Thompson’s return, the Dubs have struggled without Draymond Green in the lineup.

Ferrell reached out to Kerr about visiting the team, and after initially thinking it was a prank, Kerr agreed.

“We exchanged a couple of emails and then concocted the plan,” Kerr said. “He’s a huge Klay Thompson fan, and he knows how much Klay loves dressing up as Jackie Moon, so it was just kind of a natural fit, and it felt like a good time to do it just to make everybody laugh in a tough stretch of the season.

“He was great. He came into our locker room, made the guys laugh. Everybody loved seeing him and hearing from him. He was hilarious.”

The 44-22 Warriors are now in third place in the Western Conference, a half-game behind the Memphis Grizzlies.