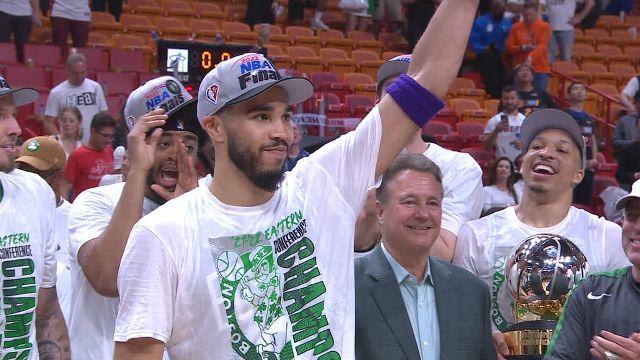 Jayson Tatum won the inaugural Larry Bird MVP for the Eastern Conference Finals, and the Boston Celtics are on their way to a Finals showdown against the Golden State Warriors.

“I still feel like a kid sometimes that I’m truly living out my dream,” said Tatum during the postgame press conference.

Boston shot out to an early lead and stayed on top despite several runs by the Heat, including a last-ditch surge in the final two minutes, for a 100-96 win.

After losing Game 6 at TD Garden, Tatum was asked how he came into Game 7 so confident.

It’s the Celtics’ first trip to the Finals since 2010 when they lost to the Kobe Bryant-led Lakers.

Tatum wore an armband, and shoes, and watched film of his childhood hero before his game for inspiration.

“I was watching some film and some moments from his [Kobe Bryant’s] career, and this is the biggest game in my career thus far, and I wanted to wear that armband to honor him and kind of share that moment in a way,” said Tatum.

Tatum and the Celtics didn’t get help from any infamous leprechauns during a series that saw the visiting team win five out of seven games.

“That’s what we do. We did all that on purpose to make it interesting,” said Jaylen Brown in jest. “Today was the biggest test… to mentally come into a Game 7 away after losing on our home court.”

Boston will start the Finals on the road at Chase Center in San Francisco Thursday night.