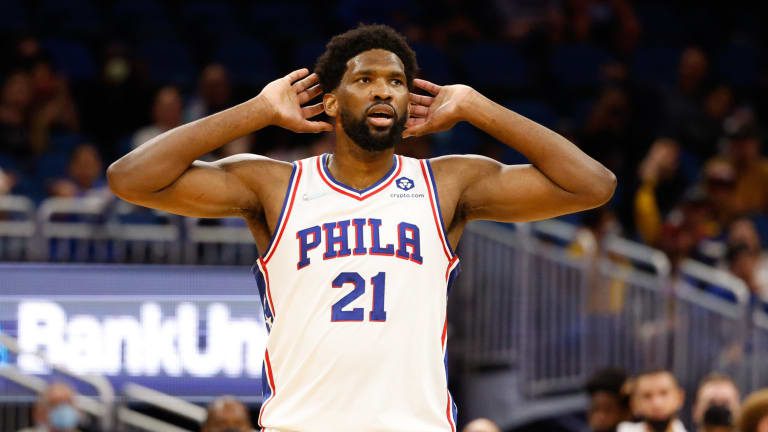 The Sixers’ Joel Embiid is battling for MVP and scoring champ honors this season as Philadelphia makes a run for the title with the recently acquired James Harden.

Though much has been written about the way Philly fans treated former teammate Ben Simmons, Embiid welcomes the criticism and praise.

The seven-foot center gave a shout-out to the City of Brotherly Love fans while chatting with former teammate JJ Redick on The Old Man & the Three podcast.

Embiid said he wouldn’t want to play in a city where fans weren’t knowledgeable or invested in the game’s outcome.

“They’re so intense,” said Embiid. “I got booed a few times, but my response has always been, I kind of took it as a positive.”

Embiid said he used the criticism to indicate that he needed to play harder; do what was necessary to win basketball games.

When asked about Simmons, Embiid said he believed the former Sixer embraced the fans, but the fans expected more from the defensive specialist.

“There was no changes,” Embiid said of Simmons’ game. “I think that’s what kind of started the whole thing with everybody being mad.”

Embiid said that Simmons is a great player, but the fans didn’t see any improvement.

Simmons has yet to lace up for the Brooklyn Nets.

The three-time All-Star received an epidural to relieve pain from a herniated disc in his back two weeks ago, but there is still no word on when or if he will play this season.

“Clearly, we’d love to have Ben play for us,” Nets coach Steve Nash said on Thursday per CBS Sports. “We will hopefully get him back. At the same time, every day, we can’t put our feet in the air because we don’t know when or if it’s going to happen.”

The Nets are 40-38 and are sure of getting at least the last Play-In spot, while  48-30 Sixers are fourth in the East with four games left in the regular season.