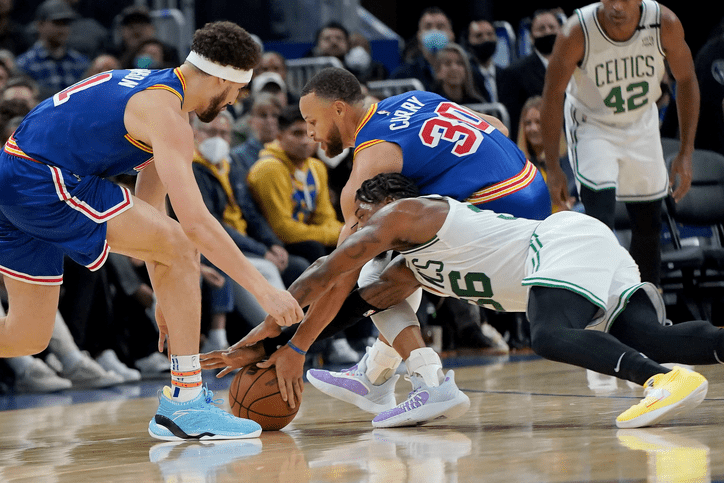 Steph Curry is out indefinitely after spraining a ligament in his left foot, according to The Athletic’s Shams Charania.

Curry suffered the injury in the second quarter when he and Boston’s Marcus Smart went after a loose ball during the Warriors’ 110-88 shellacking by the Celtics.

An MRI took after the game revealed the extent of his injury.

X-rays came back negative and showed no sign of a fracture or major damage.

Still, coach Steve Kerr and the Warriors staff were critical of Smart’s play.

The Warriors staff was upset with both of these Marcus Smart plays. First one was a roll up of Steph Curry's leg that has him currently in the locker room, second ruled a flagrant on Klay Thompson. Kerr was telling refs to review both plays, mimicking a leg chop to officials. pic.twitter.com/6edSJxQszv

After the game, the Celtics’ big man addressed the play and said he was just going for the ball.

“I saw the ball, I dove for the ball, trying to make a play,” Smart said. “Unfortunately, that occurred.”

Curry’s injury comes after just one game after Draymond Green returned to the lineup renewing Warriors fans’ hopes for a title this season.

“It sucks, but sometimes that’s just how the cookie crumbles,” Green told reporters following the loss. “I expect Marcus Smart to make that play. He plays hard. I can’t call that a dirty play.”

The third-place Warriors are 47-23 and nine games behind the first-place Phoenix Suns.

They’ve lost six of their last ten games with 12 games left in the regular season.

Green acknowledged the team hasn’t had time to play together to build continuity and consistency, and it was a worry, but he still seemed confident about the Warriors’ chances.

Golden State takes on the Spurs next Sunday.