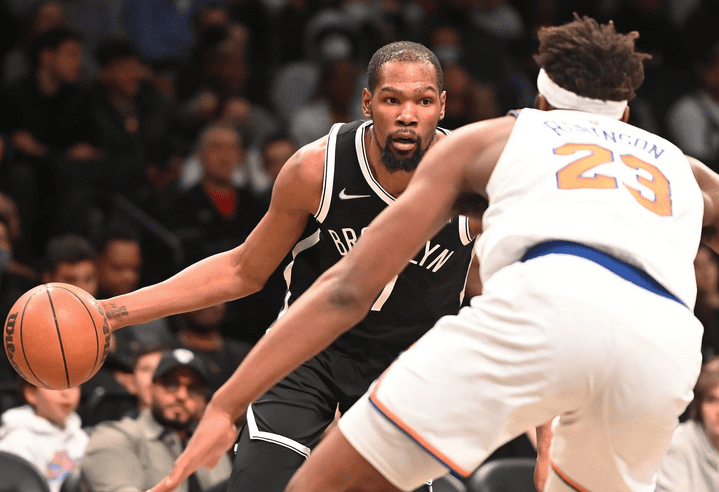 With the ineligible Kyrie Irving sitting courtside and guard Seth Curry out with an ankle injury, Durant picked up the slack, shooting 19-37 from the field and 4-13 from behind the arc.

“We were shorthanded a bit in the scoring department, said Durant during his postgame interview. “I didn’t want us to get stagnant on the offensive side of the ball, so I put up a lot of shots tonight.”

Durant added nine assists and six rebounds to his totals, Andre Drummond had 18 points, and Bruce Brown chipped in 15 for Brooklyn.

“I’m always playing with joy,” Durant said. “It’s always fun every time I step out on the floor. I’m glad we can beat the Knicks in our house on a Sunday. It’s always fun.”

After an emotional win Friday night against former teammate James Harden and the Philadelphia 76ers, the Nets came out focused, shooting over 56 percent in the first quarter to take a five-point lead and finished the half up 62-60.

The game was tight through the second half, and Durant hit a huge 3-pointer with 56.3 seconds left and sank two free throws with 6.6 seconds left to seal the victory.

Despite the win, Durant touched on the status of Irving, who is now allowed to attend games but not play.

“I don’t get it. At this point, now somebody trying to make a statement on point to flex their authority,” said Durant. “Everybody out looking for attention, and that’s what I feel like the Mayor [New York City Mayor Eric Adams] wants right now; some attention. But he’ll figure it out soon. He better.”

With their third-straight victory, the Nets improved to 35-33, eighth in the Eastern Conference, and two games ahead of Charlotte.

They’ll try to keep their streak going Tuesday against the Magic in Orlando.