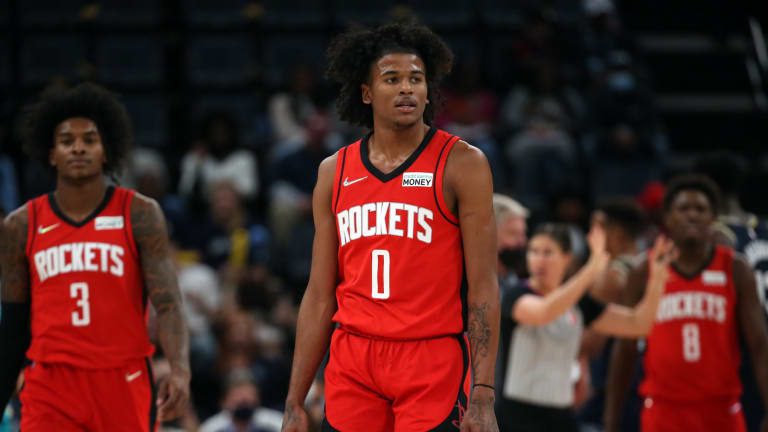 Fresh off their 106-99 loss to the New York Knicks Saturday, the Houston Rockets will attempt to win just their second game in 17 tries tonight against the Celtics at TD Garden.

Rich in young talent but short in experience and wins,  if the 1-15 (.063) Rockets continue at this rate, they could finish the season with the worst record ever in the NBA.

“It’s frustrating that we keep losing, but I mean, we see what can happen when we play hard and together,” said rookie Jalen Green after the Rockets’ loss Saturday. “We know what works. We just got to stick to it.”

The team’s descent to the bottom of the standings would have been unfathomable just a few years ago when they were considered title contenders with the addition of Chris Paul in 2017 and then again when they traded Paul for Russell Westbrook in 2019.

But the Rockets never got their title, they never even got out of the Western Conference Finals, and now Paul, Westbrook, and the face or in this case, beard of the franchise, James Harden, have all moved on to green pastures.

Under the leadership of second-year coach Stephen Silas, the Rockets have committed themselves to the future, focusing on second-year guard Kevin Porter Jr. and rookie Green while sitting veteran John Wall and his $44 million contract.

The results have been painful.

The Rockets have lost their last 14 straight, with their lone win of the season coming against the Oklahoma City Thunder a month ago.

“They made plays, and we didn’t. That’s just a team learning, growing, and fighting to the point where we got to five minutes, and we had an opportunity, and it hasn’t been like that,” a supportive coach Silas said after the team’s loss to the Knicks. “I’m proud of our guys.”

Rookie Alperen Sengun, 19, at center, and Kenyon Martin Jr., 20, at forward, have had their moments, but those moments have not been sustained long enough to score more than just one victory so far.

The Rockets go for win number two tonight against Jayson Tatum and the Celtics.