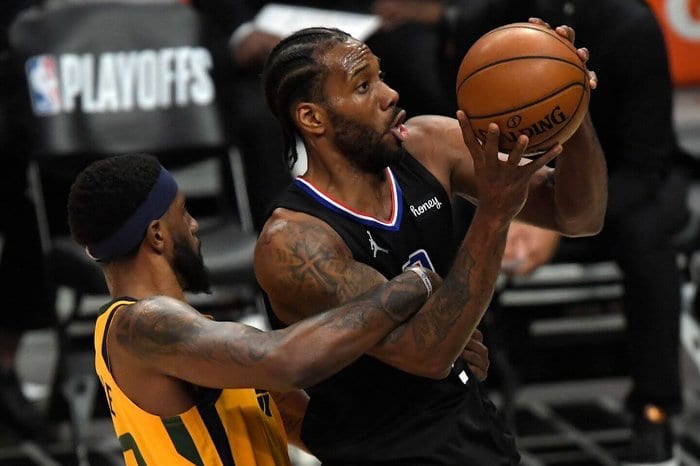 Clippers’All-NBA forward Kawhi Leonard is out for Game 5 against the Utah Jazz and possibly longer after sustaining an injury to his right knee late in the fourth quarter of the Clippers Game 4 win.

Leonard landed awkwardly after driving to the basket and sat out the remainder of the game.

Still, when asked afterward if the leg was bothering him, Leonard said, “No, I’ll be good.”

Apparently, the Klaw is anything but good.

ESPN’s Brian Windhorst is reporting that Kawhi Leonard told his teammates to prepare to play without him and that his status for the rest of the series is in doubt.

Shams Charania with the Athletic is reporting that Leonard suffered an ACL injury and is out indefinitely.

More imaging will be done on the knee, according to ESPN’sRamona Shelburne, after the swelling subsides.

More imaging needs to be done to determine the severity of the injury, but that will have to take place after swelling subsides, sources told ESPN. https://t.co/ASMQDe3PC5

The news is a huge blow to the Clippers, who tied up their series with the Jazz at 2-2 after being down 2-0 and seemed ready to write a new winning history for the franchise.

Leonard is averaging 30.4 points in the playoffs, and now their second-leading scorer Paul George will have to pick up the slack.

But George, who is averaging 24.9 points per game in the playoffs, hasn’t shown the ability to carry the team so far this season.

Injuries have plagued the 2020-21 playoffs, and the league can’t say it didn’t see this coming.

From players to general managers, it seemed everyone sounded the alarm that the shortened offseason, the condensed 2020-21 season , and the impact of COVID-19 health and safety protocols would lead to an increase in injuries.

Anthony Daivs, James Harden, Kyrie Irving, Jaylen Brown, Mike Conley, and Joel Embiid have all been out at some time, and Chris Paul is now out indefinitely for COVID-19 protocols.

Kawhi Leonard will be the 8th different All Star to miss a playoff game this year — the most in a season in NBA History, per @EliasSports.

Whether Paul tested positive is unknown, but on The Jump Matt Barnes said Paul was vaccinated.

The veteran guard, who is having a phenomenal playoff run, will be reevaluated Saturday.