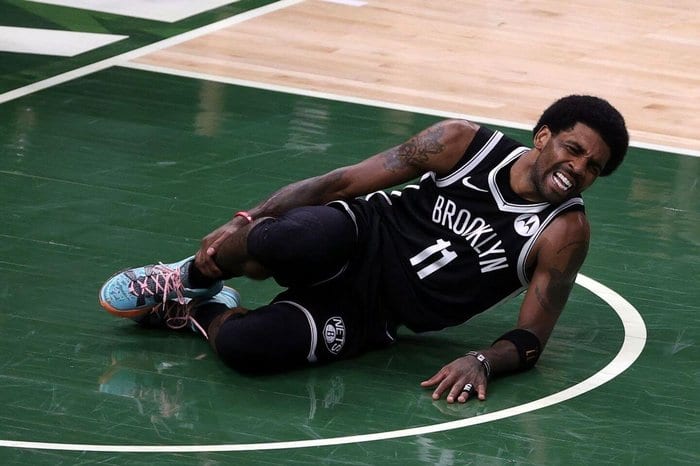 The Brooklyn Nets looked like a shoo-in for the Eastern Conference Finals just a few days ago, but after Kyrie Irving injured his ankle and the Milwaukee Bucks won Game 4, 107-96, the Nets’ playoff future is suddenly very uncertain.

Irving sprained his ankle on a layup when he landed on Giannis Antetokounmpo’s foot with 6:04 left in the second quarter and the Bucks up 44 to 38.

Irving walked to the locker room on his own accord but was ruled out for the second half of the game.

X-rays of Irving’s ankle came back negative, but further testing will be done.

The seven-time All-Star had 11 points, five rebounds, two assists, one block, and one steal when he injured the ankle.

Now the Nets’ may be without James Harden and Irving as they head back to the Barclays Center for Game 5.

Both teams came out strong at the start with playoff energy and physicality and what was an all but a must-win game for the Bucks.

Giannis had a monster game leading all scorers with 34 points and 12 boards, driving to the rim at will, and sounded confident after the Bucks’ big win.

Last year’s MVP had plenty of help in the win.

But more than his scoring was Tucker’s defensive presence in a game dominated by aggressive play from both teams.

“He’s vocal. He’s a leader. He pushes us to be great. He’s definitely a big piece of this organization. He’s gonna keep helping us, and we definitely need him moving forward,” said Giannis.

Game 5 is Tuesday in Brooklyn.