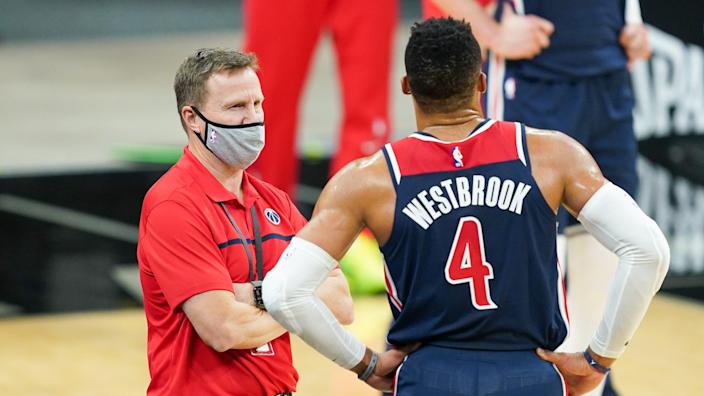 After another incident of fans gone wild in the NBA, Wizards’ coach Scott Brooks spoke for many when he said, “We all deserve better.”

On a night when the Washington Wizards managed to thwart a Philly sweep taking Game 4 122-114, reporters asked the head coach his thoughts after security chased down a fan who ran on the court with 3:40 left in the third quarter.

“That was a great tackle. I don’t know if the football club needs it, but that was a great; I mean, I love that,” said Brooks. “Sometimes, I wish we could set screens like that.”

A fan attempted to run on the court in the middle of Game 4 between the Sixers-Wizards pic.twitter.com/51pdBKOxwh

After Trae Young was spat on in New York, a fan dumped popcorn on Westbrook in Philly, a water bottle was thrown at Kyrie Irving in Boston, and fans were tossed out for directing abusive language at Ja Morant’s family during a game in Utah, teams can only wonder what may come next.

“There’s great fans in Boston, in New York, in Philly, in DC and Utah, but there’s some that need to, just, you know what, stay home. You’re thinking is barbaric. Stay home. We don’t need you; we don’t need your dollars. Stay home.”

So far, no player has been injured.

“I give these guys a lot of credit because they protect the fans and the players,” said Brooks. “But they have no fear,” Brooks said of the offending fans.”That was a long answer, but I’m tired of it. We all deserve better.”

The Wizards head back to Philadelphia for Game 5 Wednesday night.