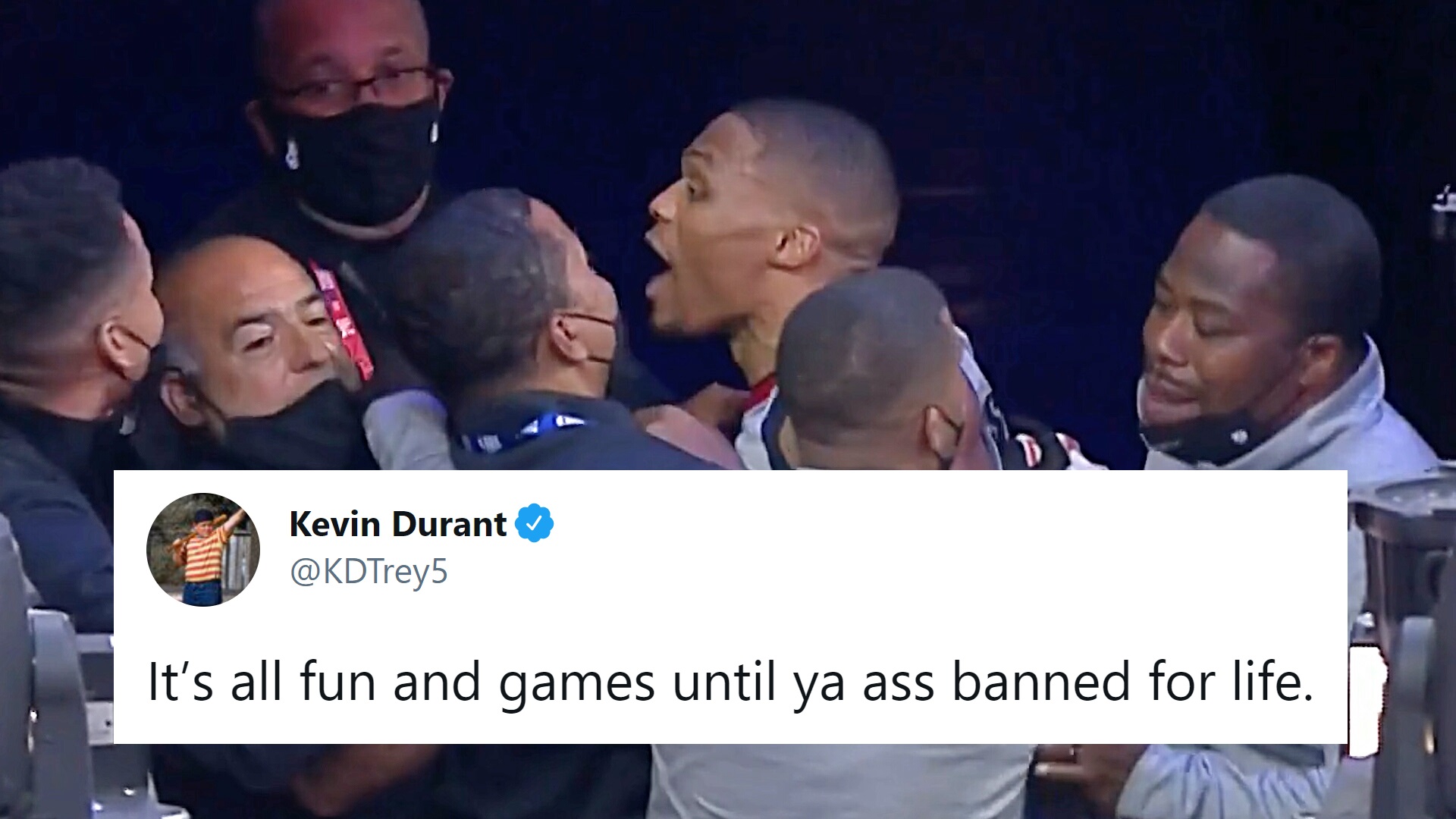 NBA fans had only been allowed back into arenas en masse for a matter of weeks when a handful of them, in separate incidents around the country, did something moronic enough to get banned for life.

All on the same night we saw a 76ers fan shower an injured Russell Westbrook in popcorn, a Knicks fan spit on Trae Young, and three Jazz fans make racist and sexual remarks to Ja Morant’s parents.

The 76ers fan had his season tickets torn up and was banned for life, while the Knicks and Jazz fans were barred from games indefinitely.

fan pours popcorn on Westbrook as he’s being assisted off floor with an injury pic.twitter.com/tGcn4kqRqq

And now, those involved are having their say on the outbreak of bad fan behaviour, and so are prominent players around the league.

“I wouldn’t come up to me on the street and throw popcorn on my head, because you know what happens,” Westbrook said following the incident.

“In these arenas, you gotta start protecting the players. We’ll see what the NBA does.”

“We as the players want to see who threw that popcorn on Russ while he was leaving the game tonight with an injury!” James tweeted.

“There’s cameras all over arenas so there’s no excuse! Cause if the shoe was on the other foot…”

Kevin Durant also chimed in, tweeting “It’s all fun and games until ya ass banned for life”.

Following the incident with Ja Morant’s parents in Utah, Morant’s father Tee told ESPN that one fan said to him: “I’ll put a nickel in your back and watch you dance, boy.”

Another made a sexually explicit remark to Ja’s mother Jamie, while the third told her: “Shut the f— up, b—-.”

Morant had the following reaction to all three fans had been banned indefinitely:

“As they should,” he said on Twitter. “My family should be able cheer for me and my teammates without getting inappropriate shit said to them.”

He added that the overwhelming majority of Utah fans that his family encountered were nothing but pleasant.

“My family told me they felt the love from all the other Jazz fans who were around them. Even bought each other drinks with a few. Those three just went too far.”

As far as Trae Young’s reaction to the fan who spat on him… all he had to say was “Keep ya mask on my boy”.

Let’s hope that going forward fans around the league can summon the decency to keep their racism, sexism, popcorn and saliva to themselves.