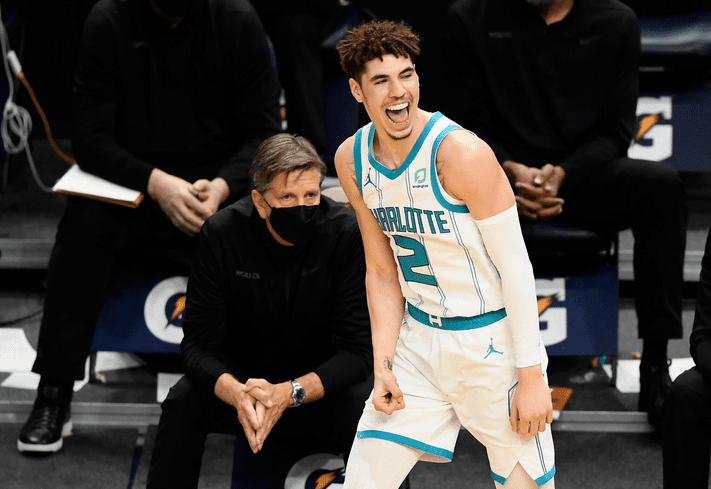 Returning to the court after a 21-game absence, LaMelo Ball has taken over the Kia Rookie Ladder No. 1 spot.

Ball, who suffered a broken wrist back in March and was thought to be done for the season, has been on fire since rejoining the Hornets lineup.

He kicked off his return with a ridiculous, almost full-court underhanded assist to Miles Bridges in the Hornets 107-94 win over the Detroit Pistons.

LAMELO WASTING NO TIME IN HIS RETURN! 🤯 pic.twitter.com/u0MTDjqLk2

Ball has been seen holding his wrist and using a heating pad while on the bench, but he’s expected to remain in the lineup as long as the Hornets are still competing.

At 33-36, Charlotte is holding on to the eighth spot in the Eastern Conference, looking at a possible play-in with the Boston Celtics.

The Minnesota Timberwolves Anthony Edwards holds onto the No. 2 spot on the Kia Rookie Ladder.

Edwards is averaging 18.9 points, 2.9 assists, and 4.8 rebounds and recently tied Christian Lattner’s 29-year-old record for most 20-point games (33) for a Minnesota rookie.

Jae’ Sean Tate with the Houston Rockets takes the No. 3 spot with season averages of 11.2 points, 2.5 assists, and 5.4 rebounds.

At No. 4 is Tyrese Haliburton with the Sacramento Kings averaging 13.0 points, 5.3 assists, and 3.0 rebounds a game.

With just a few more games to go, it seems that LaMelo Ball is everything his dad hyped him up to be.