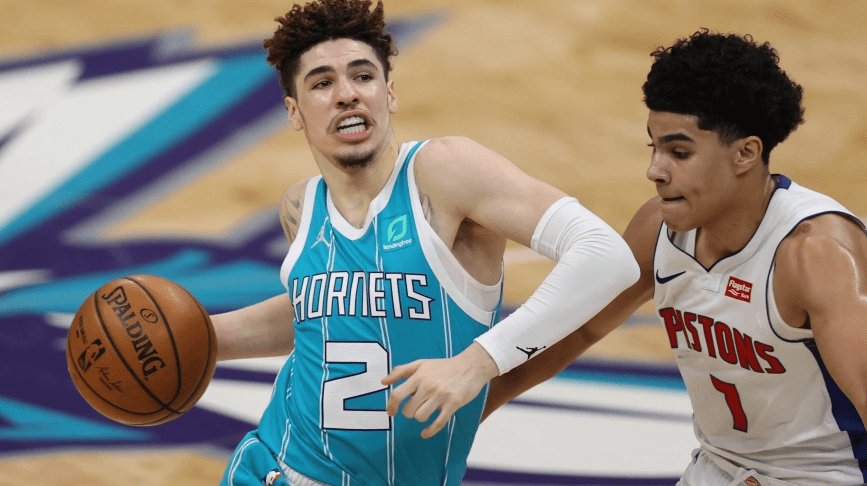 Rookie-of-the-Year contender LaMelo Ball returned to the court Saturday night after a six-week absence and didn’t waste any time making his presence felt.

The 19-year-old threw a fullcourt underhanded assist just 21 seconds into the game and helped the Hornets to a 107-94 win over the Detroit Pistons.

Ball had 11 points, eight assists, seven rebounds, two blocks, and one steal for the night in his first game back after breaking his wrist in March.

Still, his first assist of the game had everyone’s attention.

“Maybe we should be teaching the Melo underhand flip,” said Hornets coach James Borrego, via ESPN. “He’s the only guy I know [who can do that]. Maybe [Manu] Ginobili would have thrown that, as well. I’ve seen Manu throw some crazy stuff out there. I put Melo in that same Manu category.”

The pass to Miles Bridges for the score looked more like something thrown in an All-Star game.

“That underhanded pass was crazy,” he said. “You got to have top-notch confidence to pull something like that off,” said Borrego.

But the rookie sensation didn’t think the pass was a big deal.

“It kind of felt normal, I’m not even going to lie to you,” Ball said. “Facts,” Ball said. “When we was young, it was pretty much passes like that every play.

Borrego, who was tentative to start Ball, but finally gave in when Terry Rozier was injured, couldn’t hold back his enthusiasm.

“You never know how someone is going to respond off that [much] time off,” Borrego said. “If there is a guy that can maybe come back and not miss a beat, it’s Melo. He just has that instinct, that feel. That didn’t quite surprise me.”

Plays like the underhanded assist have endeared Ball with his teammates.

“It was a breath of fresh air just to have that jolt back in the gym for us,” Borrego said. “They love playing with Melo. You could feel it. The first quarter, the second quarter, it just naturally came back to us.”