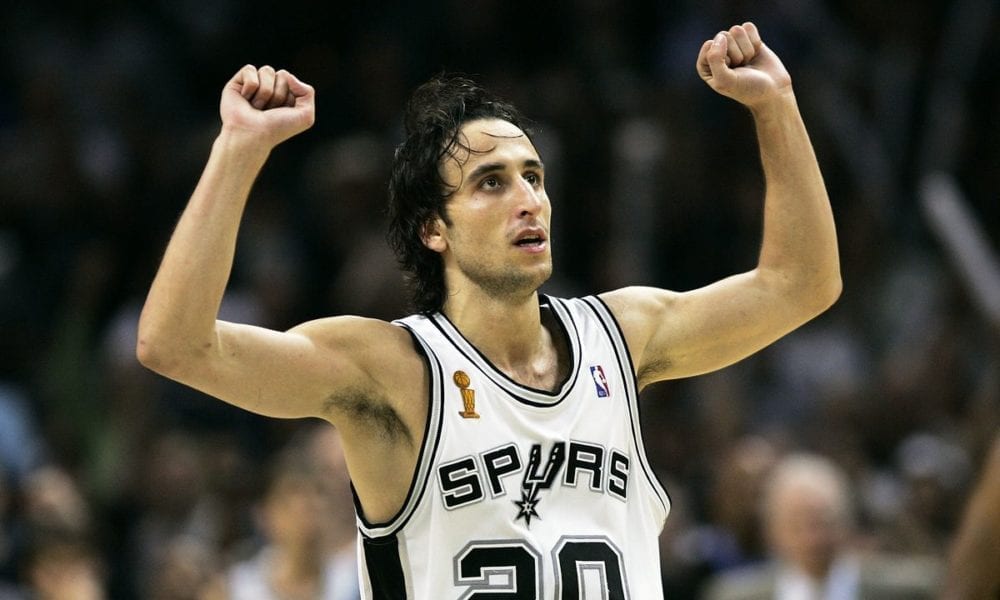 So on the night of his jersey retirement in San Antonio, we’re keeping the lovefest going by ranking his ten most memorable moments.

When a rogue bat interrupted a Spurs home game in 2009, Manu Ginobili saw a simple way of ending the unscheduled interlude: swatting that thing right out of the air.

Ginobili later had to undergo a precautionary round of rabies shots and admitted he probably shouldn’t have taken matters into his own hands.

He also had some other things to say about the matter.

“It’s just a mouse with wings,” Ginobili said. “When you can’t dunk anymore, you have to find a way to make it into the news. So that’s what I did. I grabbed a bat. I didn’t think it was a big deal. I’m going to be retiring soon. If anybody has a pest problem…”

Cast your mind back to Game 5 of the 2017 Western Conference semifinals.

Manu had already torn the roof off with a ferocious twisting dunk on Ryan Anderson.

And yet, despite being just weeks away from his 40th birthday, he still had something even better up his sleeve.

What a night this was.

The Spurs were down by 16 with just four minutes remaining before storming back and forcing double overtime, which Ginobili capped off with a barnstorming game-winner.

Incredibly, he went 5-20 from the field that night and had missed the seven shots he took before nailing the winner.

“I went from trading him on the spot to wanting to cook breakfast for him tomorrow,” Gregg Popovich said after the game.

Dunking on Yao Ming was once such a daunting proposition that during the 2000 Olympics, Team USA had a million-dollar bounty for whoever could pull it off.

Seven years later, it was no trouble for Manu at all.

Not many second-year players could light up the early 2000s Lakers, but Manu certainly could.

With Tim Duncan and Tony Parker out, a young Manu took over with 33 points, 12 rebounds and 7 assists against the most revered team in basketball at the time.

The only problem was that Kobe went off for 37 and won the game, but it was still one hell of a coming out party for Ginobili.

Not only did Ginobili go toe-to-toe with LeBron that night, he undeniably got the better of him.

Manu tore Cleveland to shreds with eight triples and a season-high 46 points.

But it wasn’t until the fourth quarter that he really made a statement, dropping 18 points in the period and kicking it off with four quick threes.

Stunned Cavaliers coach Mike Brown summed it up best after the game when he simply said this:

He looked out of sync and wasn’t himself.

But when Game 7 arrived, man did he bring the heat.

Manu was the difference-maker for San Antonio when it mattered most, dropping 23 points, including 11 in the fourth quarter, to keep the Spurs machine rolling towards another title.

Better still, he did it against the legendary Pistons team that even Kobe and Shaq couldn’t beat in the Finals the year before.

Of all the outrageous Manu performances, you won’t find many better than this.

Ginobili entered the game with two painfully bruised quads and left it with 48 points against the Spurs’ fiercest rival at the time, the Steve Nash-led Phoenix Suns.

His first play of the game – a hurtling left-handed throwdown – set the tone for the rest of the night.

Manu led the Spurs back from 16 down in the fourth quarter to capture a thrilling overtime victory.

He did just about everything that night, getting buckets all over the floor and converting 16-22 shots to miraculously drag his team across the line.

2. Bouncing back to win the 2014 NBA Finals (oh, and baptizing Chris Bosh)

As Ginobili struggled towards the finish line in an emotionally bruising Finals loss to Miami in 2013, experts around the league (both real and of the ‘armchair’ variety) wondered aloud whether this was the end for the ageing Argentinian.

His games were hard to watch and the criticism was hard to ignore.

But the Manu of old never truly left, as we learnt in the Finals the following year when he put up 15/5/3 in 28 minutes per game, redeeming both himself and the franchise with a stirring championship triumph.

One moment which beautifully summed up Ginobili’s rise from the dead was his stunning dunk on Chris Bosh, a vicious age-defying throwdown which came out of absolutely nowhere.

It was a massive slam on an even bigger stage, and as it later turned out, he did it with a stress fracture in one leg.

As always, Ginobili made the whole thing even better with a classic Manu quote afterwards.

“The last time I tried [to dunk], I got blocked by Caron Butler against OKC badly, and I was made fun of by my teammates in a rough way,” he said. “They actually made me promise I wasn’t going to try that again, and I said, ‘Yes, I won’t try that again.'”

1. Upsetting Team USA and winning gold at the 2004 Olympics

Ginobili made a global basketball statement when he led Argentina to a defiant victory over Team USA in the 2004 Olympic semifinals with 29 points, before proceeding the win gold.

Not only did he win Argentina their first ever Olympic gold medal, he also ensured the United States would miss out on one for the first time since 1988.

Sure, Team USA weren’t armed with their entire arsenal, with players like Shaquille O’Neal, Jason Kidd and Kevin Garnett all sitting out.

But they still had Tim Duncan, Allen Iverson and LeBron James.

As it turned out, the only thing that really mattered was which team had Manu Ginobili.

Related Article:  Daily Wrap: Dirk vs Wade Finale, Manu’s Big Night And What The Hell Is Jordan Bell Up To?
-->