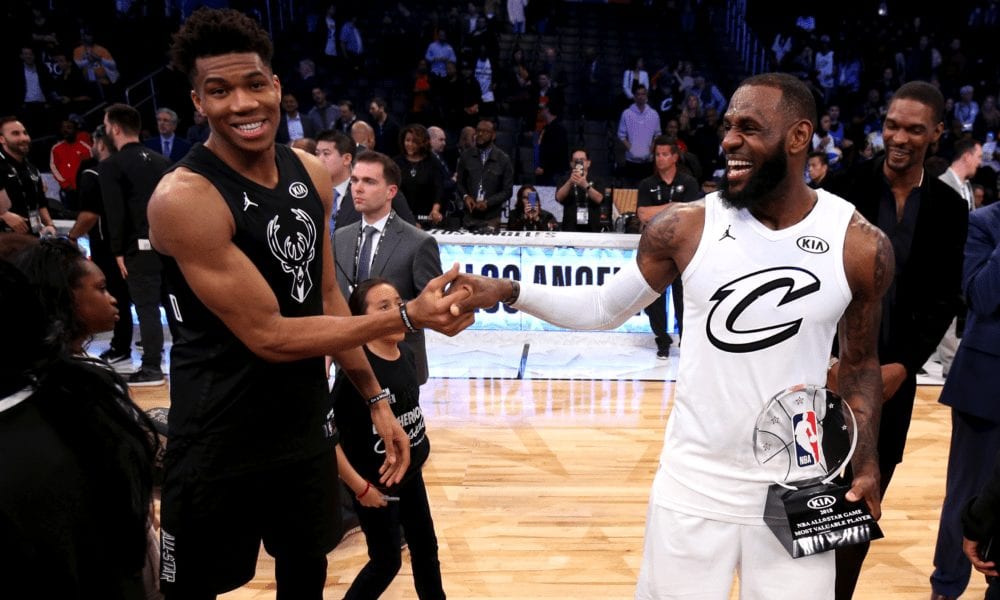 And so it begins.

All-Star Weekend returns for another year in Charlotte tonight, and with so much going on, we’ve cooked up this comprehensive guide featuring all the spiciest storylines to keep an eye on.

Here are the rosters for the NBA's Rising Stars Challenge. Who you got?

Give me the spiciest one-on-one matchup

Luka Doncic versus Trae Young will certainly be one to watch.

After being traded for each other on draft night, Doncic and Young’s careers will be forever linked.

This was always going to be more annoying for the less successful of the two, and right now, that’s clearly Young.

So it’s unlikely he’ll be cool with Luka stealing the show during the opening act of the league’s showcase weekend.

Meanwhile, Ben Simmons going up against Donovan Mitchell will never not be fun.

Mitchell was genuinely bothered by his primary rival winning Rookie of the Year last season.

When we caught up with Simmons during the offseason, he downplayed any lingering animosity, while still taking a couple of subtle digs at Mitchell.

‘Beef’ might be a strong word to use here, but individual rivalries like this one rarely die down overnight.

What’s the most interesting teammate pairing?

The combined backcourt wizardry of Luka Doncic and Ben Simmons will be something to behold.

Which of these guys balled out at last year’s game?

Kyle Kuzma had 20 points for the World Team, channelling his inner Kobe by jacking up 18 shots in 18 minutes.

How does this thing work again?

Eight guys compete on a course which requires them to complete ballhandling and passing exercises as well as layups and three-pointers.

Why should I care about this event?

Historically, your interest in this event has probably casual at best.

There aren’t many NBA Skills Contest enthusiasts out there.

But things got significantly more interesting the moment the NBA introduced big men into the fold.

It’s a change which has already given us glorious moments like Karl-Anthony Towns beating Isaiah Thomas in the final in 2016, as well as Kristaps Porzingis beating out Gordon Hayward for the title the following year.

If you aren’t down to watch Nikola Jokic attack a skills course originally designed for point guards this time around, there could be something seriously wrong with you.

And better still, they’ll be battling it out in their hometown.

Everyone loves an underdog story, so don’t be surprised if the NBA universe really gets behind Seth.

Meanwhile, Dirk’s presence alone should whip everyone into a frenzy.

Which of these guys got hot last year?

Booker’s 28 points in the final round edged out Thompson’s 25 for the trophy.

Which of these guys have been the best shooters during the season?

Brooklyn fans are so glad you asked:

If that list has got you wondering who has the highest three-point percentage, it’s Matt Bonner’s estranged son, Davis Bertans, at 47.6%.

How does this thing work again?

Each competitor gets two dunks.

The two players with the highest combined score move on to the championship round.

The finalists then get two more dunks to determine the winner.

If a tiebreaker is required, the competitors will get one more dunk each.

If it’s still tied, the judges will determine the winner.

Who’s been throwing down the nastiest dunks this season?

That honour goes to Miles Bridges.

Bridges has already claimed plenty of victims during his young NBA career.

He announced his arrival in the league by posterizing someone what felt like every other day earlier in the season.

In-game dunking prowess doesn’t always translate to the staged surrounds of the dunk contest, but it’s a good start.

Tell me a little something about each dunker

John Collins – The bookmakers have Collins down as the favourite. But at 6’10, he’ll have to defy the long line of big men who have struggled to impress the judges.

Miles Bridges – Possibly the most explosive dunker of the bunch and will have the Charlotte crowd on his side.

Dennis Smith Jr – The only current contestant to compete last year, DSJ narrowly missed out on making it through to the final round in LA.

Hamidou Diallo – You might not be overly familiar with the rookie second-rounder, but Diallo has some serious bounce. He recorded a 40.5″ vertical at the combine and at last count had far more dunks (22) than jumpers (13) to his name.

Expect Russell Westbrook to bring the heat whenever he’s going up against Ben Simmons, after being traded for the Aussie point guard on All-Star draft night.

Russ will almost certainly have LeBron on his radar too (think The Terminator) after James signed off on the trade.

Elsewhere on the court, Steph Curry and Klay Thompson’s first ever game against each other is guaranteed to be a whole lot of fun.

What are the most interesting teammate pairings?

The fact that Joel Embiid and Russell Westbrook ended up on the same team is objectively hilarious after their consistent beefing over the years.

They even had a highly entertaining run-in during last year’s All-Star Game.

LeBron and Kyrie reuniting is sure to attract plenty of attention, especially given the recent buzz surrounding the two of them making up, Irving’s impending free agency, and LeBron’s propensity for tampering.

Speaking of tampering, will LeBron use the All-Star Game to attempt to recruit players to the Lakers?

I say that with no inside knowledge, just as a semi-functioning individual with two eyes and a brain.

We’ve seen plenty over the years to suggest this is likely.

As far as professional tamperers go, LeBron’s one of the greats.