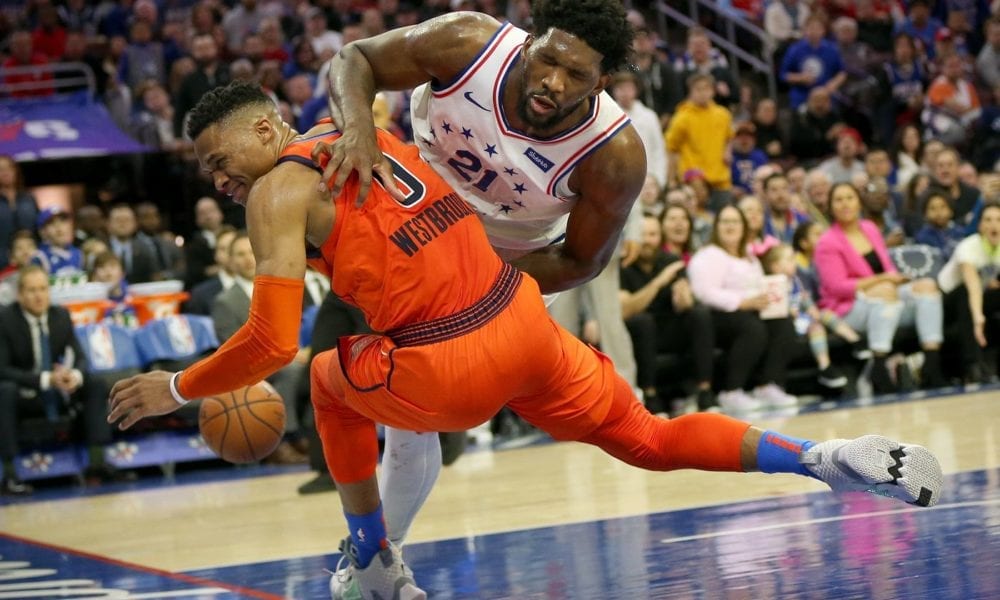 No one likes giving people shit more than Joel Embiid and no one is more averse to taking shit than Russell Westbrook.

They’re a match made in beef heaven, something we were reminded of when they faced off on Saturday.

In case you somehow missed it, their latest run-in came when Embiid crashed into a driving Westbrook.

Russ was heated after this hard foul from Embiid 👀 pic.twitter.com/DoveCV4Lk6

Russ then brought the heat during his post-game interview.

Russell Westbrook on the foul from Joel Embiid, and then asked if they are “cool.” (Warning: language): pic.twitter.com/7i0ahyEFTH

“I have no idea why (Russell Westbrook) is mad … he’s always in his feelings.”

Everything about this was spectacular, especially because it was just the most recent instalment of a thoroughly entertaining beef series between these two alpha dogs.

Allow me to refresh your memory when it comes to their spiciest past encounters.

This whole thing started just over a year ago when Embiid fouled out Steven Adams and subsequently waved him off the floor.

But OKC won the game.

Brodie had stored Embiid’s sassy wave away in that gloriously petty mind of his, and after handing Embiid the L, quickly returned the favour.

Russell Westbrook makes sure to wave goodbye to Joel Embiid after the game. pic.twitter.com/yAb97UQLW6

Russ was even kind enough to elaborate on what happened for everyone watching at home.

Russell Westbrook on waving goodbye to Joel Embiid after the buzzer: “I told him to go home.” pic.twitter.com/SUBIhfIIzu

Westbrook stares down Embiid while dribbling out the clock (January 2018)

Adding fuel to the fire was the rematch a month later.

In the final seconds, following another Thunder victory, Westbrook coldly stared down Embiid while dribbling out the clock.

Westbrook dribbles out the clock and stares down Embiid in the process 😂 pic.twitter.com/E5L8CWIcR6

There was more beef in that building than a Burger King cold room.

Embiid gets his revenge at the All-Star Game

Russ might’ve had the last laugh the night he eyeballed Embiid, but JoJo got his own back just weeks later at the All-Star Game.

All-Star Games are traditionally friendly, light-hearted affairs…but not when these two are going head-to-head.

Their most entertaining exchange came when Embiid dropped a deep three on Westbrook late in the second quarter.

Russ was immediately out for revenge and tried to catch Embiid napping on the next possession.

It did not go well.

It’s too bad these guys play in opposite conferences.

The basketball world deserves to see them lock horns four times a season, and ideally seven more times during the playoffs.