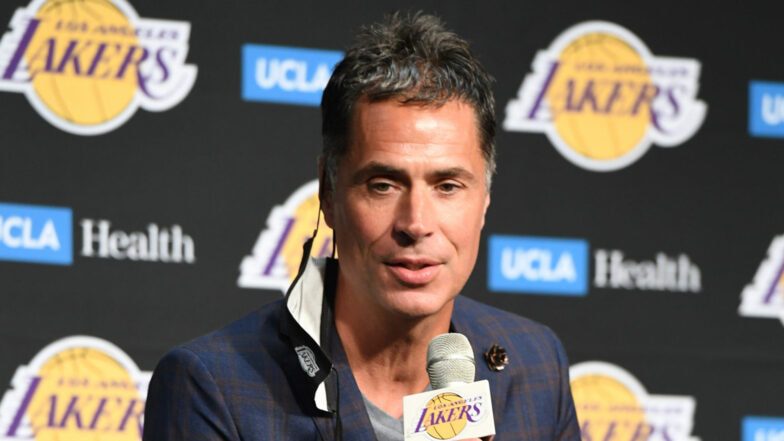 Lakers ownership, led by Jeanie Buss, made the move with the intention of Pelinka and Ham unifying on one vision for the team, according to Chris Haynes of Yahoo!Sports.

He started off as co-GM with former Laker great Magic Johnso, but their time together was riddled with speculation, rumors, and disruption in the front office, leading Johnson to quit.

Pelinka signed LeBron James in 2018 and followed up by signing Anthony Davis in 2019.

The Lakers would go on to win the 2019-20 Orlando Bubble championship.

Pelinka was promoted to VP that same year.

Despite the quick success, Pelinka and Lakers management have faced harsh ridicule and scrutiny over moves made in the last two seasons.

First, they did not resign contributors such as Danny Green, Dwight Howard, and Rajon Rondo, and last season let defensive star Alex Caruso get picked up by the Chicago Bulls.

The coup de grâce was signing Russel Westbrook, which led to one of the worst Lakers seasons ever and the team missing the playoffs.

The Lakers’ remedy was to fire coach Frank Vogel.

“Frank is a great coach and a good man. We will forever be grateful to him for his work guiding us to the 2019-20 NBA championship'” Pelinka said in a release at the time.

The team then signed Ham and, shortly after, veteran Pat Beverley.

“Super excited,” Beverley said when asked about becoming Westbrook’s teammate. “I was asked this question two or three years ago about someone I always wanted to play with, and he was the first name. Just a player with that competitive spirit, that fire, that will, that dog… that nastiness, that grit, you know. To have a running mate like that, I’ve never had that, so I’m super excited.”

The Lakers are 0-3 so far in the preseason.