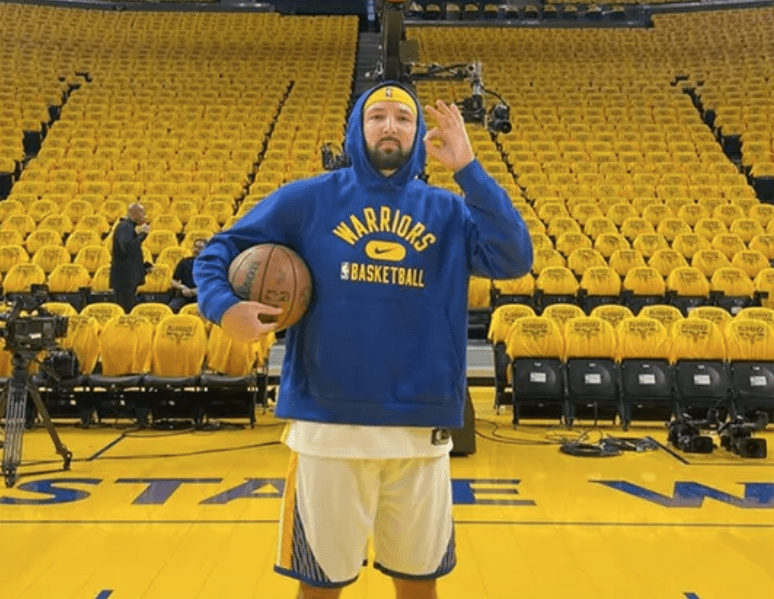 YouTuber Dawson Gurley, AKA ‘Fake Klay Thompson,’ has been gaining notoriety for years with pranks such as posing for pictures and signing autographs for fans as Warriors guard Klay Thompson during the 2017 NBA Finals, but his latest stunt seems to have gotten him permanently banned from Chase Center.

Monday, the impersonator began tweeting his escapades about two hours before tip off.

Gurley got past security and made it all the way to the court for a shoot-around before Game 5 of the NBA Finals against the Boston Celtics.

An hour later, he claimed to have received a letter from Brian J. Herbert, Vice President of Security for the Golden State Warriors.

“On June 13, 2022, you entered through the employee entrance of Chase Center prior to GSW (Golden State Warriors) vs. Boston Celtics NBA Finals Game without a valid ticket… You deliberately deceived Chase Center building personnel by impersonating a GSW employee,” the letter read, in part before telling Gurley he was in direct violation of the “Fan Code of Conduct of Chase Center, GSW, and the NBA League.”

Here’s the official letter of my ban. pic.twitter.com/Ii9VTdWI0h

“Banned bc I walked pass 5 layers of security guards (who willingly let me through security without asking for ID) & shot around on the court for 10 minutes. I also spent 10K on tickets which they are not refunding. Why should I be banned because their security is incompetent?” Gurley posted on social media.

He added, “Technically, I did not trespass. I talked to security, went through metal detectors and walked right into the building. They welcomed me with open arms. I also never claimed to be Klay.”

Gurley claimed he spent $10,000 on tickets and that the Warriors would not be refunding him.

The Klay Thompson impersonator can take some solace in the fact that the Warriors beat the Celtics 104-94 last night to take a 3-2 series lead.

Golden State now has two chances to win the NBA title, Thursday in Boston and Sunday back at Chase Center.