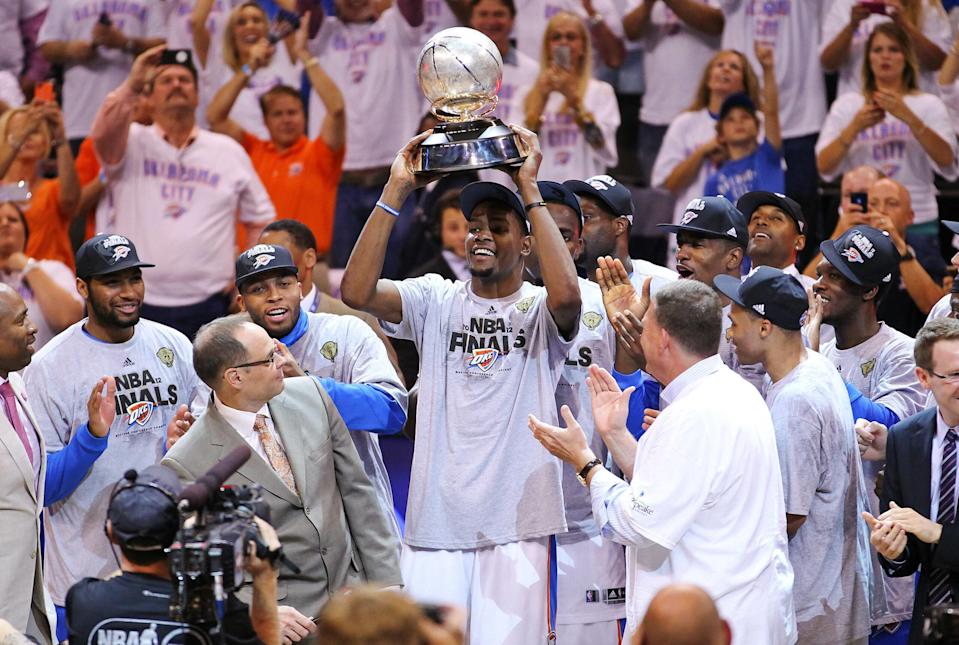 Kevin Durant would’ve been the recipient of the Magic Johnson Western Conference Finals MVP award in 2012 with the Oklahoma City Thunder.

With a new award comes hypothetical debates on who would’ve won it in previous seasons.

FiveThirtyEight’s Mike Lynch tackled this thought exercise in a recent article by handing out a Conference Finals MVP winner for every Conference Finals series in league history by looking through the average game score of players throughout the entirety of the series.

“To award retroactive conference finals MVPs, I first needed to settle on a consistent metric. After some experimentation, John Hollinger’s Game Score seemed like the best fit in terms of matching voter intuition (by rewarding players who dominate the box score) and availability (it can be applied to any complete box score since player turnovers were first tracked in 1977-78 and can still provide useful direction when some less essential statistics are missing). One important thing to note about Game Score is that a score of 10 is indicative of an average, run-of-the-mill game, while 40 is legendary. Across a series, an average Game Score north of 20 is very good and 25 is great, while over 30 for a full series is nearly unheard of. “

The only Thunder player who would’ve won a Conference Finals MVP under this formula is Kevin Durant in 2012, with a 25.7 average score. The Thunder defeated the San Antonio Spurs in six games to make their way into the 2012 NBA Finals.

Durant, who left OKC for the Warriors in 2016, went on to win multiple titles and Finals MVP awards with the Golden State Warriors.