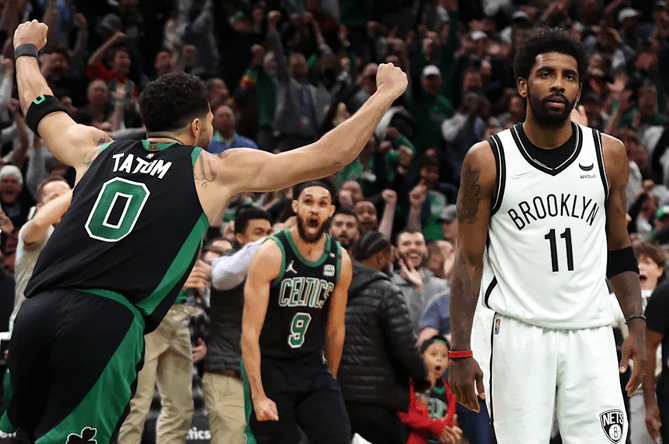 In Game 1 of their first-round series, Boston pulled off a 115-114 win despite a monster performance from Nets’ star guard Kyrie Irving.

The behind the head middle fingers by Kyrie to the crowd was slick. pic.twitter.com/J0rqdh9U51

“It’s nothing new when I come into this building what it’s going to be like, but it’s the same energy they have for me. I’m going to have the same energy for them,” said Irving. And it’s not every fan. I don’t want to attack every fan, every Boston fan. When people start yelling ‘p—y’ or ‘b—-‘ and ‘f— you’ and all this stuff, there’s only but so much you take as a competitor. We’re the ones expected to be docile and be humble, take a humble approach, f— that, it’s the playoffs. This is what it is.”

Irving refuted a reporter who asked him about the crowd’s “hostility,” instead, calling it “energy.”

“Embrace it. It’s the dark side. Embrace it,” said Irving.

Irving got some help from Kevin Durant, who had 23 points, four rebounds, and three assists, but it wasn’t enough to offset 31 points from Jayson Tatum, including a last-second spinning layup to give the Celtics the win.

“He [Marcus Smart] made a great pass, and I just had to make the layup,” said Tatum.

Al Horford added 20 points and pulled down 15 rebounds and Smart and Jaylen Brown also scored in double figures for Boston.

The two teams were all knotted up at the half, but the Celtics maintained their composure down the stretch for the win.

“I think it just shows the progression of our team and how far we’ve come,” said Tatum.

Game 2 is Wednesday at TD Garden.