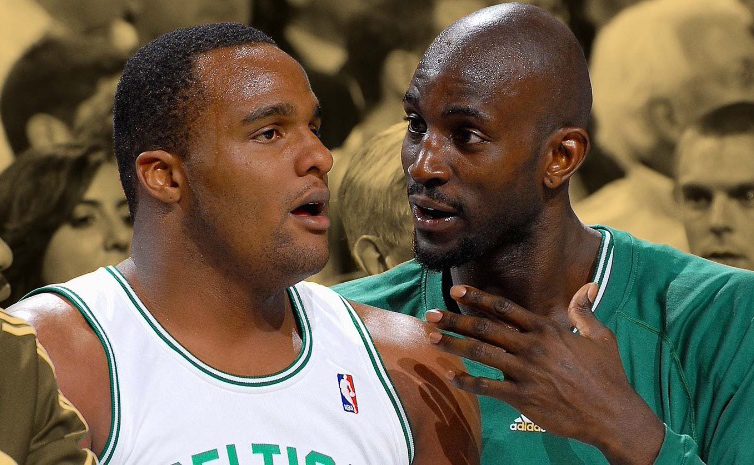 During their time playing for the Celtics, “Big Baby” was often seen with Garnett on the court and the bench talking to the future Hall-of-Famer.

In fact, Garnett was a big part of Davis’ growth in Boston as a valuable role player during their contending years.

However, Davis’ attendance at this ceremony may have landed him in some legal trouble.

On probation for his involvement in a scheme to defraud the NBA for dental work that never happened, the former Boston big man evidently violated the terms of his probation by attending the event according to sports law expert Darren Heitner.

Big Baby went viral when he was spotted sitting in someone else’s seats during the game against the Mavs, but that was not the only headache the former Celtics center would have to sort out as a result of his attendance that day.

So, Glen "Big Baby" Davis violated his bail conditions to watch the Nets play the Celtics in Boston on Sunday.

Davis has been charged with submitting fraudulent medical claims to the NBA's benefits plan.

At least the Celtics won the game. Davis is also launching a comedy show.. pic.twitter.com/kv1ZTnSoIh

Glen Davis spent four seasons in Boston, winning a title as a part of the famed 2008 squad that brought banner number 17 to Beantown.

Davis last played in the NBA in 2014-15 with the Los Angeles Clippers, who were coached by Doc Rivers at the time.