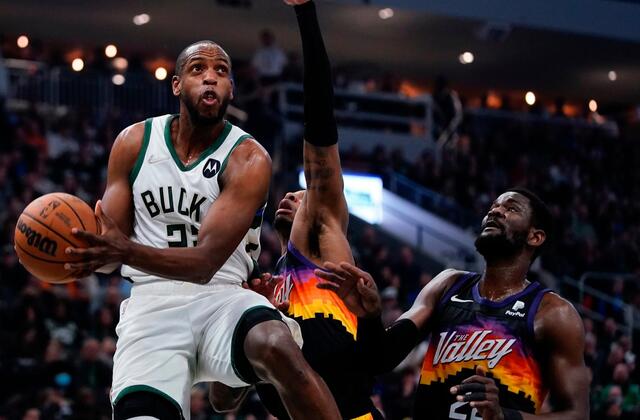 Khris Middleton came up clutch scoring a season-high 44 points en route to a 132-122 win against the Phoenix Suns as two-time MVP Giannis Antetokounmpo sat on the bench with foul trouble.

Middleton hit a turnaround fadeaway and a three-pointer on back-to-back possessions to seal the victory for the Bucks.

“It’s fun. You know, I think scorers and shooters always want to shoot every time they’re out there. Even when they don’t shoot the ball, they still feel like they’re open. But the work that I put in over the years to have confidence to shoot some of the shots that I work every day in practice,” said Middleton. “When you see those shots going in, you just think about those hours you spent trying to perfect that move, perfect that shot.”

“He takes so much pressure off myself and Giannis that we don’t have to kill ourselves and take tough shots. We can count on Jrue to do what he does; break down the defense, get into the paint, or hit some big threes tonight,” said Middleton. “He does so many things for us on both sides of the ball.”

Holiday added 24 points and nine assists for the Bucks in the win.

“We love being in those types of games,” Holiday said. “They’re a really good team. We kind of know what it takes, especially in moments like that, what it takes to win games.”

The Suns were without Chris Paul and Devin Booker but still had a chance to win near the closing minutes before Middleton took over.

Despite the loss, the Suns are still first in the Western Conference at 51-13 and winners of seven of their last ten games.

Milwaukee at 40-25 is third in the Eastern Conference, three games behind the first-place Miami Heat.