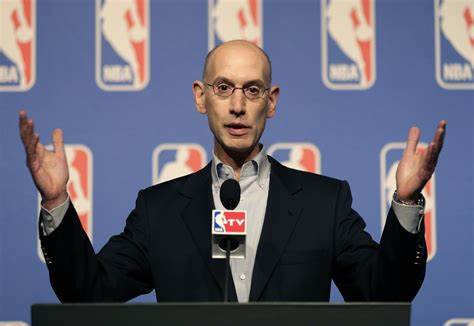 Adam Silver, Commissioner of the NBA, said the New York City vaccination mandate preventing Brooklyn Nets guard Kyrie Irving from playing in home games “doesn’t quite make sense to me,” during an appearance Wednesday morning on ESPN’s Get Up.

As a player unvaccinated against COVID-19, Irving isn’t allowed to play at the Barclays Center because of the mandate.

However, a player from a different market who is unvaccinated may play in New York City.

“This law in New York, the oddity of it to me is that it only applies to home players,” Silver said.

“I think if ultimately that rule is about protecting people who are in the arena, it just doesn’t quite make sense to me that an away player who is unvaccinated can play in Barclays, but the home player can’t. To me, that’s a reason they should take a look at that ordinance.”

With the NBA offices in New York City, Silver has seen firsthand some of the masking restrictions being lifted, and he mentioned that there’s a different “feel” in the city and that more people are out and about.

“So while, again, my personal view is people should get vaccinated and boosted, I can imagine a scenario where Brooklyn, as part of New York City, with a new mayor now who wasn’t in place, Eric Adams, when that original ordinance was put into place, I could see him deciding to change along the way and say it’s no longer necessary to have a mandatory vaccination requirement, as I said, particularly one that only affects home players,” Silver said.

At a news conference Wednesday, Adams said the rule keeping Irving from playing is unfair, but he also said he’s hesitant right now to change anything.

“First of all, I think the rule’s unfair. I believe that we are saying to out-of-town athletes that they can come in and not be vaccinated. Yet New York athletes, you have to be vaccinated. And they also do this for entertainers. I want people to know that. Entertainers can come here without being vaccinated and perform. I think it’s unfair,” he said.

“And I’m not sure if a Boston fan created this rule. I don’t know. But I am really, really leery about sending the wrong message. Having this city close down again keeps me up at night. And the message we put in place, the rule was put in place. To start changing it now, I think it would send mixed messages. So I’m struggling with this, just to be honest with you.”