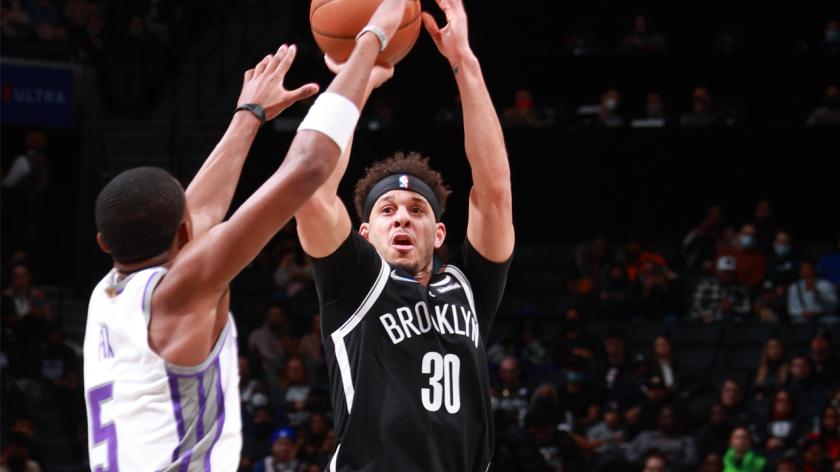 Less than a week after being traded from the Philadelphia 76ers, Seth Curry scored a team-high 23 points in a 109-85 win over the Sacramento Kings, ending Brooklyn’s 11-game losing streak.

Curry, who was part of the deal bringing disgruntled Sixer Ben Simmons to Brooklyn, started the game with new Net teammate Andre Drummond.

Along with dropping 23 points, Curry grabbed seven rebounds and dished out five assists in just over 32 minutes of action.

The seven-year veteran said coach Steve Nash made it easy, giving them simple actions to run.

“If you’re a smart basketball player, you should know what to do out there, so kind of playing fast, up-tempo, just pushing the ball,” said Curry after the game.

Curry’s play was a welcome sight for coach Nash who has struggled to put players on the floor in the wake of injuries to Kevin Durant and Joe Harris and Kyrie Irving’s limited availability.

Drummond, who brings some needed size to the paint for the Nets, notched 11 points, nine rebounds, four assists, two steals, and a block.

“A great feeling for me. To be here and get a win in Brooklyn, especially at home,” said Drummond. “Once everybody gets back, I think we’ll be very, very good and make a very good push in the playoffs.”

The Nets have not given the word on when they expect Simmons to play, but he was seen cheering on his teammates along with Kevin Durant from the bench.

The 25-year-old point guard hasn’t seen any action since last year’s playoffs but was working out daily at the Sixers training facility before the trade.

“We’re gonna have so many weapons out there, offensively and defensively. It’s gonna be a lot of fun to play,” said Curry.

The Nets are 30-27 and sit in the eighth spot in the Eastern Conference.