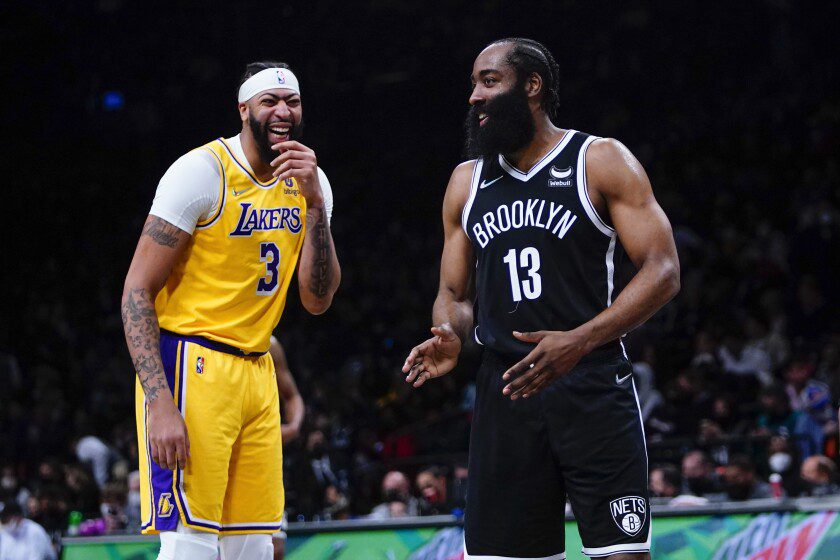 Anthony Davis’ return to the court Tuesday night was a sore sight for Laker fans who still believe their team can capture this season’s Larry O’Brien trophy.

Davis had eight points, four blocks, two assists, two rebounds, and one turnover in just over 24 minutes as the Lakers defeated the Nets 106-96 in Brooklyn.

It was the first action since December 17 for the eight-time All-Star, after spraining his MCL.

First play of the game. Great to have you back, @AntDavis23 🙌 pic.twitter.com/dljoittWhw

“The first week and a half, I was able to do single-leg squats, two-leg squats, run a little bit.,” said Davis during post-game comments.

After four weeks, the big man took off his brace and said he focused on how the knee felt and being comfortable while playing to determine when he would return.

“It was a great rehab. I was able to get my body fully right and now we move forward,” said Davis.

The three-time block champion started strong in the first quarter, but slowed down, scoring just two points the rest of the game.

“For the most part, I felt fine. I felt great out there,” said Davis. “The first couple minutes, the adrenaline took over, then that went away.”

When asked if there was a play or moment when he knew his knee was good, Davis responded, “I don’t think about it when I’m playing… [If] I feel like I gotta babysit, I shouldn’t be on the floor.”

The Lakers are now 2-1 on their six-game road trip, which takes them to Philadelphia next, and then the Charlotte Hornets before wrapping up their East Coast swing in Atlanta.

Davis will get his biggest challenge of the trip against Joel Embiid, who is having a stellar season for the Sixers in spite of the Ben Simmons controversy.

Although LA has hovered at or below the .500 mark all season, LeBron James sounded confident following the Lakers’ victory over the Nets.

“The challenge we’ve had this year has been different.” James added, “I think we have a really good team.”