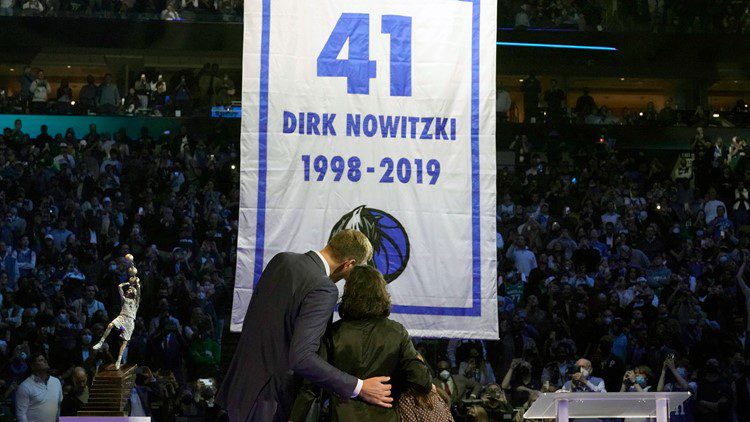 The Dallas Mavericks made it official Wednesday, raising 14-time NBA All-Star Dirk Nowitzki’s No. 41 jersey into the rafters after defeating the visiting Golden State Warriors 99-82.

The sellout crowd of 20,441 burst into chants of “MVP,” as Nowitzki walked onto the court for the postgame ceremony.

The 43-year-old recalled not knowing what to expect when he arrived in Dallas in June 1998 after being drafted.

“Thank you guys from the bottom of my heart for making this journey incredible,” said Nowitzki during the ceremony. “And thank you for taking in a long, lanky kid over 20 years ago and making him one of your own. I’ll be always grateful.”

Dirk Nowitzki's No. 41 takes its rightful place atop the American Airlines Center. 💙 pic.twitter.com/W8MgKgd0ST

The seven-footer from Germany was joined by his family, members of the 2011 championship team, and governor Mark Cuban.

“I want everybody to see your greatness forever, Dirk,” said Cuban. “So your name is on the court. And even though you didn’t want it to happen, your silhouette is on the floor. And one of the things we do so that all future Mavs fans and all future players will always know your greatness is, we put your numbers up in the rafters.

Still, Cuban had a few surprises for the big man in addition to the t-shirt donning a young Nowitski holding his jersey in 1998 with his infamous Backstreet Boys haircut.

“Even though you don’t want it to happen, the silhouette [of Nowitzki] is on the floor, and it will be there forever,” Cuban said before unveiling a statue of Nowitzki. “Budget was a little tight, Cuban joked before explaining, “this will be in front of the arena, and it’s going to be big.”

A member of the 75th Anniversary Team, Nowitzki played all 21 of his seasons in the NBA with the Mavericks and led the team to their first title in 2011 against the Miami Heat.