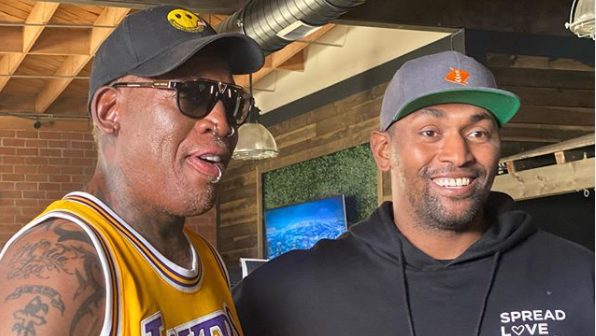 Dennis Rodman and Metta Sandiford-Artest, the artist formerly known as Ron Artest, are not only two of the more unusual, colourful and controversial players in NBA history, they’re also two of the greatest defenders the game has ever seen.

Sandiford-Artest, whose most recent name change combines his last name with his wife’s, has some thoughts on which of the two players was a better wing defender, and perhaps somewhat surprisingly he went with Rodman over himself.

“So when I was during my prime, I definitely thought I was the best,” he said on The Draymond Green Show. “I won a Defensive Player of the Year, and I probably would’ve won more if I wasn’t suspended.”

READ MORE: The Most Embarrassing NBA Records of All-Time (Updated)

“But as I looked back at it and I was doing my research, especially after you came up with your comments. I actually looked at a lot of different wing defenders. And I think Dennis Rodman is probably the best wing defender that we’ve seen.”

“You’ve gotta go watch his tape, and I was looking at it. And I’m only familiar with him from the power forward position, but the way he guarded Jordan and Pippen, I was just like ‘Oh wow! This guy might be a better wing defender than me! I never thought there were better wing defenders than me, you know?”

Sandiford-Artest easily could have backed himself in that debate, and a lot of players would have done so if they were in his shoes. But ultimately, he has the utmost respect for a fellow defensive great.