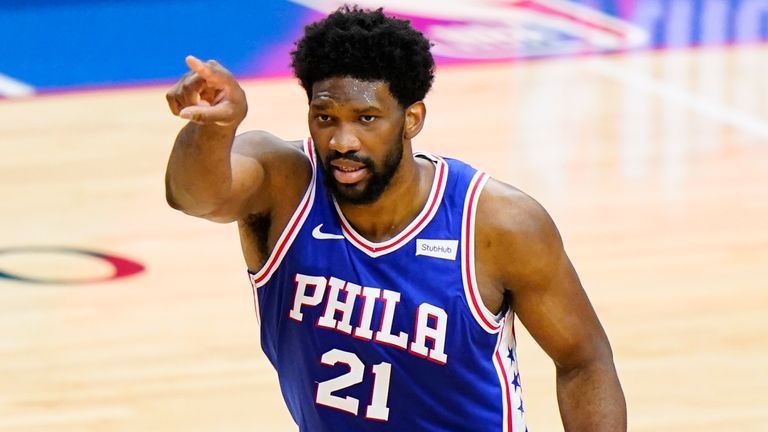 Philadelphia 76ers’ big man Joel Embiid was finally back on the court Saturday night after missing nine games with COVID.

Embiid scored a game-high 42 points and grabbed 14 rebounds in Philly’s 121-120 double-overtime loss against the Minnesota Timberwolves.

The three-time All-NBA player, out of the lineup since Nov. 8, spoke on the severity of his illness after the game.

“That jawn hit me hard. I mean, I really thought I wasn’t going to make it. It was that bad, so I’m just thankful to be sitting here,” said Embiid. “I struggled with it, but I’m just glad that I got over it, and I’m here doing what I love with some good people.”

“I really thought I wasn’t going to make it. It was that bad.” 😳

Joel Embiid's bout with COVID-19 was worse than he ever imagined. pic.twitter.com/JE3zK0PElT

Embiid “couldn’t breathe” and had headaches “worse than a migraine” per NBC Sports.

The seven-foot center said he couldn’t even get up and down the court more than three times Friday while practicing and didn’t think he would be able to play against the Timberwolves.

Instead, the four-time All-Star played 45 minutes and scored 13 of his 42 points in overtime.

“It’s a miracle I played this many minutes,” said Embiid.

The Sixers are 2-8 their last ten games and now sit in the 11th spot in the Eastern Conference.

Ben Simmons is still out of the lineup with no indication of when or if he will return or if the team has found any possible trade partners.

Sill, with Embiid back, Philly can expect to start gaining some ground, though players and fans alike were reminded it was just a game.

“This [COVID] is bigger than basketball,” said the Minnesota Timberwolves’ Karl-Anthony Towns, who lost his mother and several family members to the coronavirus.

Towns and Embiid have had their differences, but the two spoke before Saturday’s matchup.

“We’ve had our thing for a while, but this is bigger than basketball. That’s bigger than what we have. I’ve seen it kill people. And I’m glad he’s on the other side,” per Dane Moore.

The Sixers take on the Orlando Magic Monday.