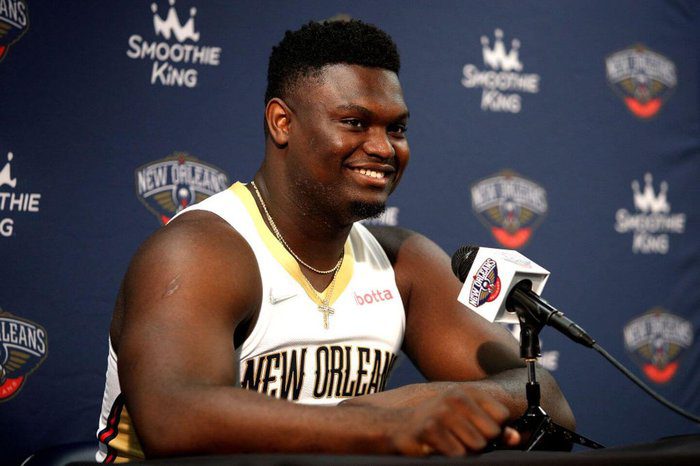 The city of New Orleans is famous for its local cuisine, but Pels’ franchise player Zion Williamson may want to refrain from a second helping of jambalaya since he now tops 300 pounds on the scale per Bleacher Report’s Jake Fischer.

Due to a foot injury, Williamson sat out the Pelicans’ season-opening loss against Philadelphia last night, and New Orleans does not have an expected date the 21-year-old’s return.

“There’s a strong belief in league circles that the Pelicans were unaware of that procedure until Williamson reported to New Orleans ahead of media day, although one team source contacted by B/R maintained the Pelicans and Williamson were aligned on the injury’s timeline,” per Fischer.

On the Pelicans, Zion Williamson, and yet another injury complicating the franchise’s future with their star: https://t.co/5ph36iOqN3

“He’s since reached north of 300 pounds this offseason, sources said,” per Fischer. “When he joined the Pelicans’ recent preseason trip to Minnesota, several league personnel on hand were struck by his heavier appearance than his listed playing weight last season of 284 pounds. ‘I know Zion at 280, and he was not 280,’ said one observer.”

Williamson’s health has been a topic of concern since the Pelicans drafted him No. 1 in 2019.

He missed the first three months of his rookie season due to a knee injury before finally playing his first game against the San Antonio Spurs on January, 22, 2020.

His off-season foot injury seems to be once again putting the team and the player at odds as New Orleans tries to protect its investment and Williamson looks to get back out on the court.

Last March, Williamson expressed his concern about trimming down his weight during an interview with JJ Redick on “The Old Man and the Three” podcast.

“I don’t want to get to a spot where I’m like, ‘Yeah I lost a lot of weight, but I don’t feel strong. I can’t do certain things I would do before,”  Williamson told Reddick. “I do think there is another gear I can reach regarding both weight and conditioning.”