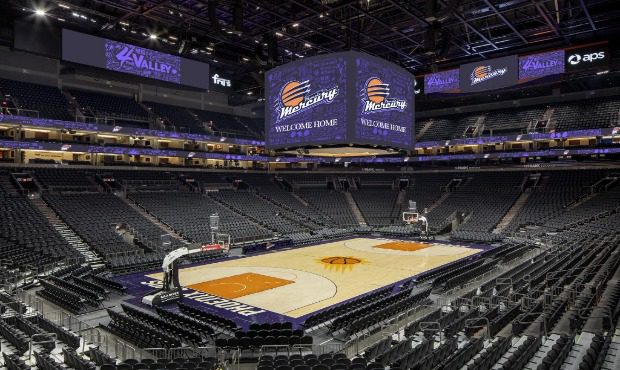 The NBA’s Suns and WNBA’s Mercury will tip off back-to-back games at Footprint Center in Phoenix Wednesday, October 6, marking the first-ever doubleheader for the two leagues.

The Suns will play an exhibition against the Los Angeles Lakers at 3 pm on NBA TV before the Mercury host Game 4 of their best of 5 semi-finals against the Las Vegas Aces on ESPN.

Both games will be played on the Phoenix Mercury’s home court.

“There were a lot of moving parts and a number of groups, including the NBA and WNBA, the Lakers and their local broadcast partner, and ESPN that had to work together to make this happen,” said Jason Rowley, the president, and CEO for Suns Legacy Partners, LLC, in a statement. “In the end, all parties should be proud to be a part of this historic doubleheader.”

Despite the Suns’ and Mercury’s games being held so close together, each game is being treated as a separate event, with fans required to buy tickets for both contests.

Maintaining homecourt has been a challenge for the Mercury this season.

Multiple times the team has been booted from Footprint Center due to scheduling conflicts.

A first-round game versus the New York Liberty was relocated to Grand Canyon University due to musical artist Maluma’s concert.

The team also had to play Game 3 of their series against the Aces at Arizona State’s Desert Financial Arena because of a Disney on Ice show.

The Phoenix Suns have been big supporters of their fellow Footprint residents.

Devin Booker and Chris Paul were seen courtside cheering on the Mercury after Paul bought and handed out a block of 500 tickets for Sunday’s Game 3.

The Mercury will have a chance to wrap up their series with a win on Wednesday and go for their fourth title against the Connecticut Sun/Chicago Sky winner.