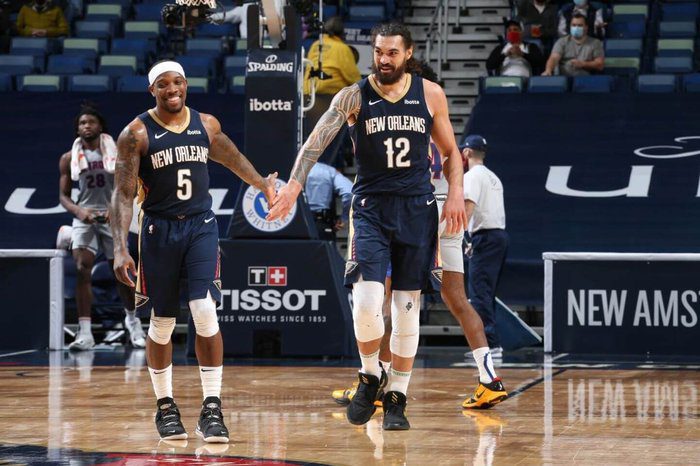 The New Orleans Pelicans’ planned trade with the Memphis Grizzlies will open up enough cap space for the team to sign an All-Star caliber player.

According to ESPN’s Adrian Wojnarowski, the Pelicans are sending center Steven Adams, guard Eric Bledsoe, and the 2021 Draft 10th and 40th picks, and a top-ten protected 2022 first-round pick from the Los Angeles Lakers to the Grizzlies for center Jonas Valanciunas, and the 17th and 51st pick of this year’s draft.

The move will give the Pelicans an additional $21 million to add a top-tier player like Toronto’s Kyle Lowry to their young core of Zion Williamson and Brandon Ingram.

Lowry is a good defender and an even better offensive threat averaging 17.2 per game last season while shooting 39.6 percent from behind the arc.

Plus, he would bring some much-needed experience and veteran leadership to the Pels and serve as a reassurance to Williamson and Ingram of the front office’s commitment to winning.

New Orleans looked poised to become a contender in the Western Conference with the addition of rookie Williamson, the play of 2019-20 Kia NBA Most Improved Player Brandon Ingram, and the progress of Lonzo Ball’s shot.

But coach Alvin Gentry was replaced with coach Stan Van Gundy for the 2020-21 season, and the veteran coach never seemed to click with the young team, while Adams and Williamson’s games didn’t seem to complement each other as much as the Pels thought they would.

Now, new coach Willie Green is being called to improve on that record, but just who will be suiting up for the Pelicans is yet determined.

Ball, a restricted free agent, was the focus of several rumors involving the Chicago Bulls before last March’s trade deadline and still may find himself out of New Orleans and in the Windy City before the season starts.