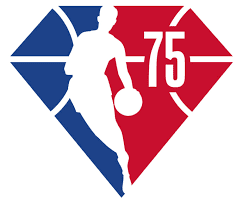 The logo is getting a makeover for the NBA’s 75th Anniversary season.

Instead of the traditional rectangle, the new silhouette designed after Hall of Famer and former Laker Jerry West is framed in a diamond, the stone used to recognize 75th anniversaries.

A basketball pattern appears within the diamond and the number 75.

The new logo will be featured throughout the 2021-22 season on all official NBA merchandise, broadcasts, digital and social media, in arenas, and anywhere else the logo appears.

The commemorative NBA 75th Anniversary Season logo will appear throughout the 2021-22 season on courts and official NBA merchandise, inside arenas and in original broadcast, digital and social media content. pic.twitter.com/Tq7w3R2s7i

The league also plans to release new throwback uniforms for each team.

This will be the fourth anniversary the NBA has celebrated.

Despite the excitement, some fans may be disappointed that Kobe Bryant was not used for the revised logo.

After Bryant’s death, there was a movement to change the logo from West’s to Bryant’s silhouette, though the league continues to deny that the logo was designed after West.

The former Laker great, who later went on to work for the team as general manager, and brought Bryant to LA, has said he has never been comfortable being the logo and would welcome the league to change it.

Jonathan Coleman, the co-author of West’s autobiography West by West: My Charmed, Tormented Life, said in a June 2017 interview, “The logo, this is not something he was at all seeking. It was Walter Kennedy’s [former NBA Commissioner] idea. Walter felt it was important to have a brand for the league. Jerry’s proud to be the logo, but it’s also embarrassing to him, in equal measure.”

The league, which eventually became known as the NBA, was formed on June 6, 1946, and held its first game on November 1 between the New York Knicks and Toronto Huskies, per Sam Quinn for CBS NBA.