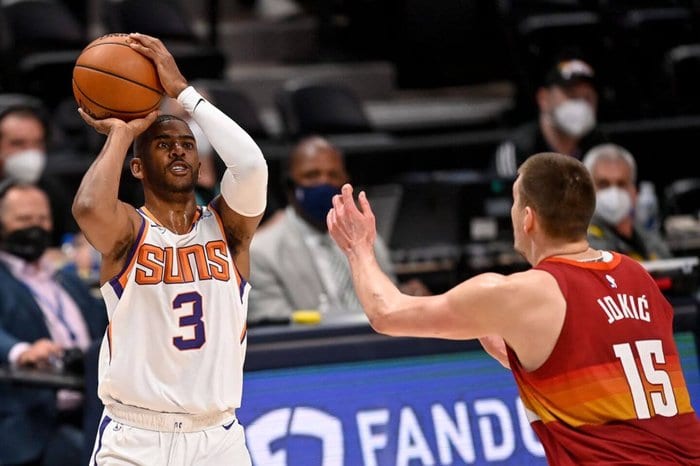 Chris Paul and the upstart Phoenix Suns are headed to the Western Conference Finals for the first time since 2010 after sweeping the Denver Nuggets 4-0.

Once again, the veteran guard led the way for his young team scoring a game-high 37 points along with seven assists, three rebounds, and two steals in their 125-118 win.

After the game, Paul told TNT, “A couple of years ago, they were writing me off. This ain’t about me. It’s about us. Show you what you can do when you come together as a team. We got a great team over there, and it’s a lot of fun to be a part of it.”

“A couple of years ago they were writing me off. This ain’t about me. It’s about us.” @CP3 spoke with @ChrisBHaynes after the Suns advanced to the WCF. pic.twitter.com/vI8Pnhyb2k

The Phoenix Suns now wait on the LA Clippers-Utah Jazz series winner, with the Jazz up 2-1.

It was the seventh straight win for the Suns who have been a roll since Game 4 of the first-round series against the defending champion Los Angeles Lakers.

Denver played without last year’s bubble hero Jamal Murray, who tore his ACL back in April, but they had gotten strong play from Michael Porter Jr. and they had this year’s just-named MVP Nikola Jokic.

Still, it wasn’t enough to overcome the Suns who’ve played inspired ball since Chris Paul suffered a shoulder injury in Game 1 against the Lakers.

Jokic scored 22 points and grabbed 11 rebounds, but he was tossed out of the game in the third quarter after a hard foul against Cam Payne.

Despite the loss, Jokic had praise for his team. “They beat us. They whooped our ass. But, I think the whole team needs to walk out with our head up. It is what it is. Sometimes you need to accept a loss. Sometimes someone can beat you, accept it and try to be better,” said Jokic. “The whole season was great until the last four games.”