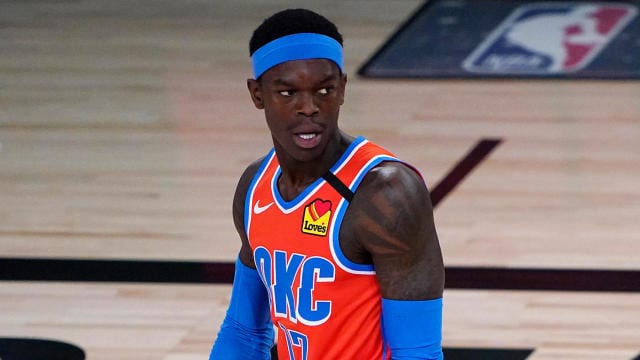 Dennis Schröder was flat out awesome in 2019/20 for the OKC Thunder. Playing off the bench behind a very tidy backcourt pairing of Chris Paul and Shai Gilgeous-Alexander, Schröder excelled in a sixth man capacity – averaging a tick under 19PPG, to go with a handful of assists and rebounds, on his way to polling second in the Sixth Man Of The Year award.

However, an excellent impact bench player is not what Schröder wants to pigeon-hole himself as, making it abundantly clear to his new team the LA Lakers, that he is ready to start in their backcourt – and to make an immediate impact to their championship defence.

Speaking to the LA media for the first time yesterday, Schröder said that the time was right for him to step up and take his place in a tasty looking starting five unit.

“I did this off the bench stuff already the last two years in OKC,” Schröder said.

Continuing, Schröder pointed to LeBron James’ increased usage last season, and noted that he was excited to be able to take some pressure and strain off the reigning Finals MVP’s shoulders when it came to ball-handling and facilitating duties.

“I [think I] can be helpful as a starter at the PG position so that LeBron don’t have so much [of the ball-handling] stuff [on] his mind.”

It would seem a natural fit for Schröder to slide into that starting role, too, as the Lakers say goodbye to two of their point guards from the 2019/20 season. Avery Bradley has left the team, and Rajon Rondo just signed a two year deal with the Atlanta Hawks – so the role is there for the taking for the German national.