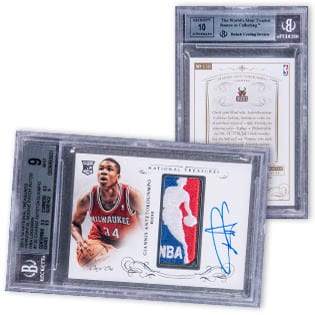 Forget property, or trying to pick the share market – basketball cards are the new currency, and one anonymous NBA fan has splashed a jaw-dropping amount of cash in order to secure what they believe will be a big ticket item in years to come.

It came in the form of a signed Giannis Antetokounmpo Logoman rookie card – which was picked up for a cool $1.812 million USD on Sunday. It is the most expensive basketball card ever sold.

BREAKING: The Giannis Logoman card was purchased for a modern day basketball record of $1.812 million by @onlyaltofficial, which also bought the previous record holder, the $1.8M LeBron card, six weeks ago. pic.twitter.com/gXnut9OOFg

The card, and the attached piece of game-worn jersey from the back-to-back MVP’s rookie season earned a ‘mint 9’ rating (which means it is in just about perfect condition).
The purchase just surpassed the previous record of $1.8 million even, which was dropped on a LeBron James rookie card. That specific item had a 9.5 grade, and was one of less than 25 made on the entire planet.

This LeBron James card just sold at @GoldinAuctions for $1.8 million, the record for a modern day card.

Winner is @LeoreAvidar, who says purchase is part of strategy to “bring something big to the collectibles and alternative asset business in the coming months.” pic.twitter.com/rN9lepvVpE

And here’s the kicker…

According to Darren Rovell, who works in the business of sports betting for Action Network HQ, the buyer of the James card was the same as the buyer who purchased the Antetokounmpo card on Sunday.

For those ready to come to their next pub trivia night fully across the business of sports cards, the record for the highest ever recorded purchase of a sports card lies with MLB star Mike Trout, who had a 9.5 rated, autographed card sell for an eye-watering $3.93 million last month.