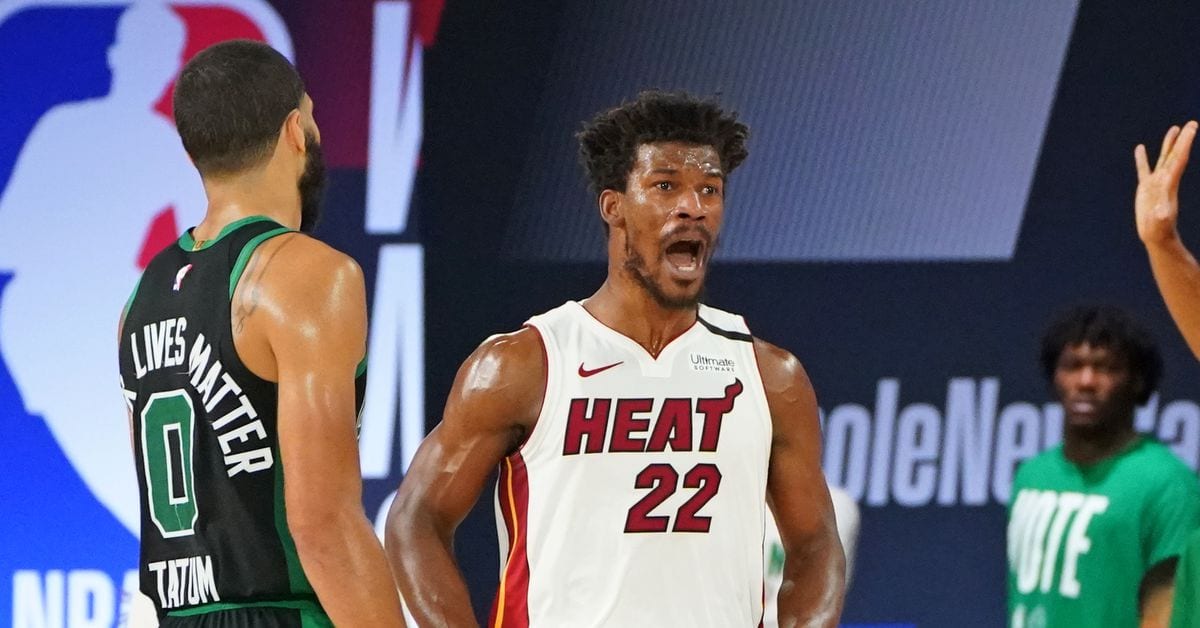 The Miami Heat are now up 2-0 in the Eastern Conference Finals after a see-sawing game two win. Here are the five biggest talking points from the contest.

Jimmy Butler has brought a dogged attitude and a fighting spirit to Miami, and it has rapidly seeped through their locker-room.

They play every game as hard as the previous, irrespective of situation or scoreboard, and they are now very legitimate championship contenders as a result. Butler was outstanding in their series win over the Bucks, and he has carried that through to this ECF matchup.

His fourth quarter performance today was masterful. He got to the line at will, and was super frisky on the defensive side of the ball, coming up with three big steals in the final four minutes as the Heat capped off their second match-turning run of the contest.

He doesn’t need to score every night, but his ability to lift those around him is an intangible that many championship teams have leant on in the past.

After being snubbed for the Most Improved Player of the year gong, Bam Adebayo continues to thrive on both ends in this series. In game one it was that highlight block on a Tatum hammer dunk that won them the game, whilst tonight his second half was absolutely outstanding, and totally swung the game back in Miami’s favour after being down as many as 16 points at one point just before the main break.

His is third quarter was one of his best of the season. He became the focal point of the offense, scoring 15 points in the term. His two man game with the shifty and highly underrated Goran Dragic continues to blossom, and puts a smile on the face of many basketball purists.

Adebayo adds a level of unpredictability to the Heat’s offensive sets – especially when he becomes the ball handler and playmaker at the top of the key. He has an uncanny knack of making the right pass, his dribble hand off game is up there with any big man in the league, and his finishing around the rim grows more reliable with every passing game. He had 21/10 tonight, but his presence was felt even beyond that, as the Heat clawed their way back after a hot Boston first frame.

Robinson Unafraid Of The Bright Lights

Duncan Robinson is utterly fearless. Either that, or he has a short term memory span that would make a goldfish look like Albert Einstein.

After struggling to find his shot in game one, and getting attacked by Boston in the pick and roll, Robinson came out with a point to prove.

He ran off screens with aplomb, and shot the lights out. He had 18 points on 6/12 shooting from behind the arc, and you could argue that his hot shooting in the first half actually kept Miami in the ball game as Boston ran rings around the Heat through the first 24 minutes of the fixture.

Credit must go to Erik Spoelstra and his front office for allowing the Heat’s young guys to do their thing – irrespective of the stakes in any given game. It is rare that you see rookies have plays get run for them, especially at this stage of the season, but Duncan Robinson and Tyler Herro clearly have the full faith of their coaching staff, and they repay them by hitting big shot after big shot on any given night.

Boston only had 41 second half points in game two, and a big part of that was their baffling inability to cope with Miami’s zone defensive scheme.

BOSTON: we’re very good we can win a championship

*miami goes into a zone*

In the third quarter, Boston logged only 17 points, and couldn’t penetrate Miami’s 2-3 zone, as they continually turned the ball over, and were forced to put up late shot clock low percentage heaves. The Heat’s rotations are already very quick, and when they do go to a zone, their close outs and rotations become even easier and faster to execute. Boston are sorely missing a big and mobile cutter to play off ball to combat that defensive set up, and the continued absence of Gordon Hayward continues to make their life that bit more difficult on both ends of the floor.

This stat is particularly damning:

The Heat have allowed 41 points over 48 possessions playing zone through 2 games.

The 0.85 points per possession against zone is well below the 0.98 ppp the Celtics have averaged this postseason in the half court. @SynergySST with the intel! @Jammer2233 🎥 @MiamiHEAT pic.twitter.com/yooIxVOJsC

Head Coach Brad Stevens is a highly instinctive and adaptable strategist – but his lack of creativity on the offensive end in the second half ultimately was the difference, as the Heat’s suffocating defensive stretch closed out the contest.

What is a playoff series without some off-court controversy?!

Gary Washburn from the Boston Globe reported after the game that Marcus Smart and multiple teammates were involved in a heated shouting match that lasted for an extended period of time in the Celtics locker room after the loss that saw them go down 2-0 in the series.

He then went as far as to say that the scene was as feisty as he’d seen in his time covering the NBA.

Been outside a bunch of locker rooms in my days. That’s was as raucous as I’ve ever heard. #Celtics

Many of the Boston players then left the court, refusing to front the media. They have cancelled their usual practice for tomorrow, too.

Obviously emotions run high in these situations, and the Celtics who did speak to the press were quick to talk down the issue – but it’s certainly an unwelcome distraction for a team that needs a bounce back win in game three.