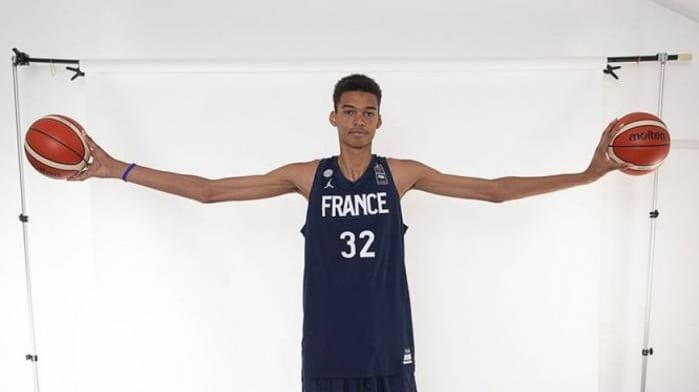 Standing at 7-foot-2 with an obscene 7-foot-10 wingspan, the young Frenchman has been hailed by some as the best prospect in the world regardless of age, even ahead of high school phenom Emoni Bates.

Make no mistake, if Wembanyama was playing in the United States instead of Europe, his highlight reels would be more viral than Gangnam Style circa 2012.

“He blocks shots like Rudy Gobert and shoots like Porzingis,” ESPN draft expert Mike Schmitz said on Brian Windhorst’s podcast last month. “He can handle and pass. I’ve never seen anything like him.”

It’s true, the only thing more eye-catching than Wembanyama’s body is his skillset.

The fresh-faced big man – who has every chance of being drafted first overall in 2023 – has incredible defensive instincts, making him a shot blocking nightmare for anyone he comes up against.

Wembanyama has a smooth stroke for someone of his age and size, and he has the vision and creativity to whip pinpoint passes all over the floor.

He also moves and plays with surprising fluidity for someone with such an impossibly long and thin frame.

He can even handle the ball and push the pace in transition.

It’s as if some evil genius constructed the perfect modern big man in a lab somewhere and then dropped him in the middle of France.

Then there are all the intangibles that Wembanyama brings to the table.

He’s tenacious, he never takes plays off, he dives on loose balls, and he’s poised beyond his years.

As is typical of elite European youngsters, Wembanyama is already playing professionally.

He debuted for hometown Nanterre 92 in France’s top tier as a 15-year-old, becoming the second-youngest player to ever compete in the EuroCup.

And while the hardworking prodigy is more than capable of playing against grown men, he has made a mockery of endless opponents within his own age group.

While playing for Nanterre’s under-18 team at an Adidas Next Generation Tournament qualifier shortly after his 16th birthday, Wembanyama averaged 15.8 points, 12.0 rebounds, 6.0 blocks and 2.8 steals in just 28.1 minutes across his four tournament games.

In one particularly ludicrous game, he put up 22 points, 15 rebounds and a tournament record nine blocks.

Another night, he had 18 points, 16 rebounds, six blocks and six steals in just 24 minutes.

And all this was after he averaged nine points, 9.6 rebounds and a tournament-best 5.3 blocks in the 2019 FIBA U16 European Championship, which was highlighted by his 12 points, 21 rebounds and eight blocks in a quarter-final win against Croatia.

Of course, every young player has weaknesses and for Wembanyama, one of those is his athleticism.

His father is a former long jumper, his mother played basketball, and his sister won a gold medal with France at the under-16 level, but his athletic heritage still hasn’t been enough to get his enormous frame all that far off the ground (at least not yet).

He won’t be able to rely solely on his reach when he reaches the NBA, even at his height (and even if he keeps growing).

And despite being a good ball handler and shooter for his size, he hasn’t always been reliable and would certainly benefit from some improvement in those areas before he reaches the league.

There are also understandable concerns about his ability to stay healthy, considering how incredibly thin he is and how quickly he has grown.

Admittedly, it almost feels silly critiquing players when they are this young.

Wembanyama is effectively still a child, and still 10-12 years away from his prime.

He has plenty of time to work on his game and body before then.

And when he does finally arrive in the NBA, he is going to be an absolute sight to behold.