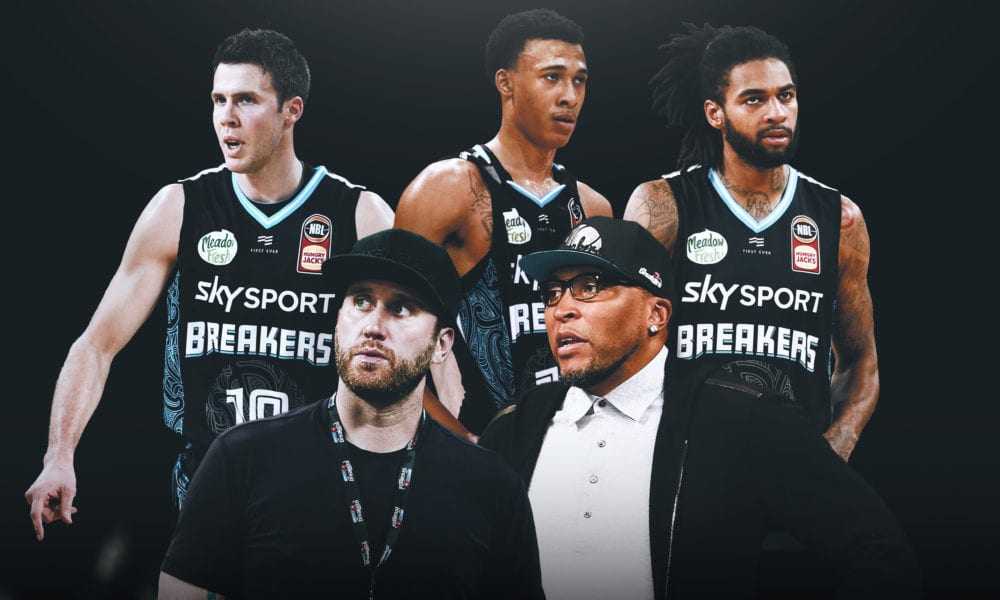 The once wildly-successful New Zealand Breakers are embroiled in turmoil as the embattled franchise stumbles from one controversy to the next.

The Matt Walsh and Shawn Marion owned club’s most recent incident involved at least one member of the Breakers stealing alcohol from Perth Arena, as reported by Channel 7 and later confirmed to Basketball Forever by New Zealand themselves, after the team dropped to 2-7 with a round seven loss to the Wildcats.

.@PerthWildcats confirmed they are aware of the incident #NBL20

Breakers forward Tom Vodanovich then caused a drunken disturbance on the team’s flight back to Auckland, where police were waiting to question him.

New Zealand has since handed down an undisclosed punishment to Vodanovich without suspension.

The club has also reimbursed Perth Arena, according to Breakers owner Matt Walsh.

“It’s been addressed, we have coordinated with the arena, the Wildcats and the league,” Walsh told Basketball Forever. “The issue has been closed so I’m not sure what the relevance of this is.”

Walsh added that Perth Arena staff members were present at the time.

“The players went up and engaged the staff, I don’t know exactly what words were spoken, but they weren’t sneaking around.

“It was wrong for the players to put the Perth Arena staff in that position. It’s not on the staff members to tell big basketball players that they can’t have something.”

Even after Walsh said he had reimbursed the venue, Breakers guard Corey Webster insisted the drinks were given, not taken, according to correspondence forwarded to Basketball Forever by Walsh himself.

It’s also worth noting that Walsh has never been one to spend money if he doesn’t have to, as former coach Kevin Braswell can attest.

The whole PR nightmare in Perth closely followed freshly-signed import Glen Rice Jr. (a high-risk acquisition with a history of off-court incidents) being arrested after an altercation outside an Auckland bar.

Rice Jr. pleaded not guilty to a single charge of injuring with intent last week, was released on bail, and is scheduled to appear in court again in February.

Just days before Rice Jr. found himself in front of a judge, Walsh was fined and suspended for challenging NBL Commissioner Jeremy Loeliger to a public shouting match on the Melbourne Arena concourse following RJ Hampton’s ejection against the South East Melbourne Phoenix.

Remarkably, all this bad behaviour has stemmed from a club which, along with the Perth Wildcats, was once the NBL’s benchmark for success on and off the court.

Walsh’s ownership group planned on lifting the Breakers to even greater heights when it bought the club in February 2018, with dreams of making a global impact.

They made an immediate splash in that regard with a tongue-in-cheek billboard recruiting LeBron James attracting worldwide attention, as did a photo of Barack Obama posing with a Breakers jersey.

On the surface this was just a bit of clever marketing, but it was easy to think the franchise had struck gold with a fresh group of bold and innovative owners.

In fairness, there have still been some significant positives for the Breakers this season too.

But that kind of promise for the future only makes the recent string of controversies all the more disappointing.

Walsh, however, has hit back at suggestions that there is a behavioural pattern emerging or a cultural problem of any kind.

“I urge you or anyone to talk to the people that work here, to talk to our sponsors and partners,” Walsh told Basketball Forever.

“I categorically deny that there’s a culture problem. I think that’s a lazy narrative and I think it’s easy to just say that. If we were 7-2 and we were healthy, we’re not having this conversation.”

According to Walsh, the recent controversies were merely a string of isolated incidents.

He said Vodanovich was “one of the highest character guys” on the team, while admitting he should have made his complaint about Hampton’s ejection via official channels and in a less public manner.

But he rejected the notion that it was a mistake to sign Rice Jr. despite his checkered past.

“We knew exactly the risk we were taking when we signed him,” Walsh said. “This wasn’t something that we took lightly. We spoke to Glen at length.

“We considered the fact that (head coach) Dan Shamir had a relationship with Glen and had worked with him before. So, we took what was in our mind a calculated risk.

“You talk to our guys here about how Glen was in practice, how he treated the staff, how he was at community events, he was fantastic. I like to believe that we have the culture and that we have the people that can help people like Glen.

Walsh added that Rice Jr. was seeking professional help with the team’s assistance, but said he would be surprised if the former Washington Wizard ever played for the Breakers again.

Of course, the club’s turmoil hasn’t been confined to the events of recent weeks.

Integral and longtime Breakers players and staff members have left in droves since Walsh’s consortium took over.

New Zealand locals and Breakers championship-winners Mika Vukona, Alex Pledger and Shea Ili also left following the takeover of an ownership group which has been criticised for disregarding the development of local talent, something which was previously a strong focus and helped the club win four championships between 2011 and 2015.

Meanwhile, very few longtime Breakers’ staff members have survived Walsh’s reign and many were eager to jump before they were pushed, with reports emerging that no one’s job was safe after Walsh’s first full season in charge.

Another problem for this ownership group is that amid the storm of recent controversies, Walsh’s words will likely do little to ease the New Zealand public’s concerns that the Breakers have become the broken.

Meaningful improvement off the floor is the only answer there, and until that happens, the club will continue to have its critics.

Not that Walsh is worried about his critics, largely because he believes many of them have an axe to grind.

“A lot of the people who were here before (the ownership change) are not with us anymore, and it’s those people who are the detractors,” Walsh said.

“It’s the Mike Fitchetts of the world (former assistant coach) who resigned in the airport after I paid for him to go on an NBA trip and who begged for a second chance at his job after we found out some damaging information about him six months ago.”

“I have made no public comment about the culture at the Breakers and nor do I intend to,” Fitchett said in a statement released to Basketball Forever.

“As such, I’m not sure where Matt is coming from on this point. Regarding Matt’s comments and inferences about the USA trip and my employment at the Breakers, these are both untrue and defamatory.”

But Walsh’s singling out of former Breakers employees didn’t stop there.

“Dillon Boucher was quoted as saying the Glen Rice Jr. signing ‘wouldn’t have happened on my watch’. Take a look at the history of the Breakers and the guys who’ve been given a second chance.

The way things are going, Walsh and his ownership group might need a second chance of their own.

Despite the seemingly constant fallout, the Breakers boss has stopped short of apologising to New Zealand fans in the past.

But again, actions speak louder than words anyway, and there’s still time to steady the ship.

Corey Webster’s input was received shortly after publication. Perth Arena management declined to comment on the stolen alcohol development. Dillon Boucher declined an interview request for this story. Kevin Braswell could not be reached for comment.

Related Article:  How Aron Baynes Became The Key To Phoenix Rising From The Ashes
-->