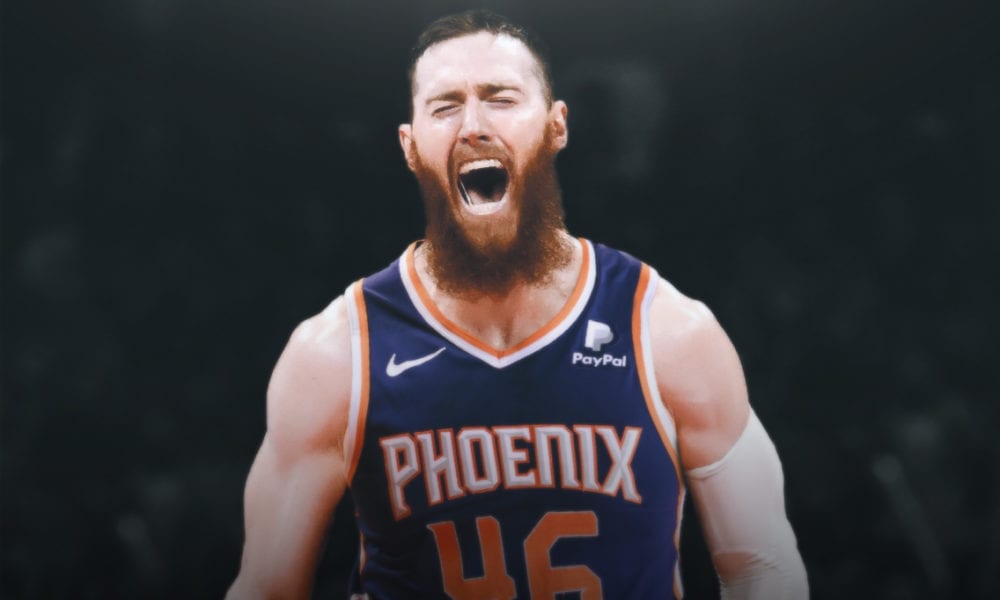 On a mild Saturday afternoon in the weeks preceding the FIBA World Cup, Aron Baynes folded his 6’10” frame into a couch that was, to his inconvenience, designed for normal-sized people and opened up to Basketball Forever about what had become the most important offseason of his career.

Baynes explained that he had worked himself into the best shape of his life, a painstaking process which eliminated any health concerns that came with squeezing a World Cup campaign between a pair of gruelling NBA seasons.

Of course, players raving about how much they have improved their bodies has become an annual media day tradition, meaning those sorts of comments are now generally taken with a hearty pinch of salt.

But fast forward just a few months and Baynes is averaging 16.2 points (his previous career-high was 6.6) on 59 percent shooting in 24.3 minutes, and has emerged as an incredible difference-maker for the Suns.

When it comes to assessing how exactly he has done that, a good place to start is beyond the arc.

After attempting just seven threes across the first five years of his career, Baynes has already made 22 this season, hitting them at 50 percent, a strike rate which ranks 11th league-wide among players who have attempted at least 10 threes.

While it would be unreasonable to expect Baynes to maintain that sort of production all season, right now he is hitting triples at a better rate than long-range specialists like JJ Redick and Kyle Korver, meaning he has plenty of room to regress and still be shooting the ball at an elite level.

The true value of Baynes’ shooting prowess – and a major contributor to the Suns having a 9.5 net rating when he’s on the floor – is the way it opens up the court for Devin Booker and Ricky Rubio, allowing them to operate in space and be the very best versions of themselves.

That in itself has been a complete game-changer for Phoenix, and something that DeAndre Ayton – who was replaced in the starting lineup by Baynes after being suspended for ingesting a banned substance – is unable to bring to the table.

On top of his shooting, Baynes’ bone-rattling screens only serve to provide even more space for his teammates, and as @BuyTheBulls noted on Twitter earlier this week, “Everyone has a plan until they run into an Aron Baynes screen”.

Combine all that with his strength, mobility, defensive smarts and general relentlessness, and the towering Aussie has rapidly emerged as one of the Suns’ most important players.

Any skepticism towards reducing his minutes upon Ayton’s return would be understandable, especially considering the numbers Baynes and his four best running mates are putting up as a unit.

Phoenix’s most-used lineup – which consists of Rubio, Booker, Oubre, Saric and Baynes – boasts an outrageous offensive rating of 124.1, the highest of any five-man unit in the league which has played at least 50 minutes.

For reference, the Celtics currently have the league’s best offence and their rating is 113.8.

It’s evident that The Baynes Effect has also spread beyond that five-man lineup and throughout the entire team, and the Suns have been much better than their 6-4 record suggests.

They have already beaten the Clippers and Sixers, while two of their losses have been by one point to the Jazz and Nuggets, and their latest loss came in an exceptional effort against the Western Conference-leading Lakers.

Phoenix even has the fourth-best point differential in the league despite playing the fourth-toughest schedule so far.

We could bathe in juicy statistics all day, but remember, the big fella doesn’t care about stats anyway and is still doing all those typical Baynes things that don’t show up in the stat sheet.

His effort is outstanding, he fearlessly contests everything, his energy is unabating, he fits beautifully within the team’s offence with 80% of his field goals being assisted (sorry, I know we agreed that we would stop showering ourselves in stats) and again, his screens are so rock-solid that they may one day kill someone.

The best part is, Baynes indirectly warned everyone that someone big was coming when he sat down with us in August.

He was dead serious about being in career-best shape (a remarkable achievement in itself considering he is almost 33), never prioritizes rest over national team duties, and takes more physical punishment than anyone in the NBA.

And remember, no one has been able to lift the Suns out of their near-decade-long malaise.

Not Devin Booker, not DeAndre Ayton, and not even four top-five picks between 2013 and 2018.

Instead, the true difference-maker came in the form of a monstrous Australian with a straggly, Suns-orange beard.

Zero NBA experts saw that coming, but maybe they should have.