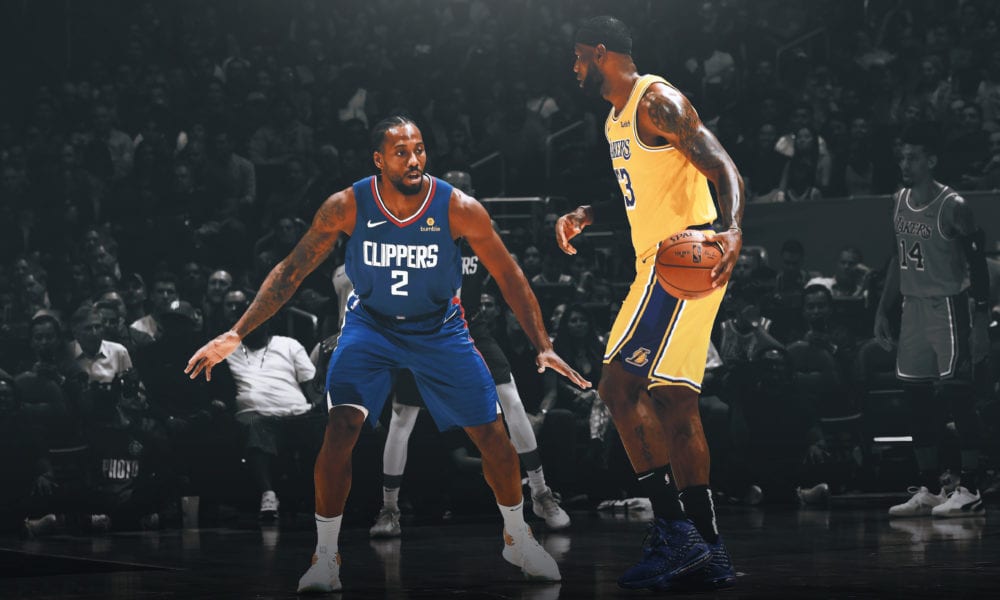 As the dust settles on the Clippers’ 112-102 win over the Lakers in a game that most players falsely claimed would not mark the beginning of a rivalry, we take a look at how the Clips won the first battle of LA.

Kawhi killing them softly (and efficiently)

Kawhi Leonard had some fighting words he needed to back up after dropping a New Balance commercial on Tuesday that declared LA was “his city.”

He did exactly that, finishing with 30 points on 19 shots, to go with six rebounds, five assists, two steals and a block.

But strangely, he looked out of sync in the opening stages, kicking things off with two missed shots and two turnovers as the Lakers opened up a 17-8 lead which was punctuated by a LeBron James fadeaway over Leonard.

However, it wasn’t long before Board Man flipped the switch and started coldly dismantling the Lakers, one bucket at a time.

LeBron’s squad fought back in a game that ebbed and flowed all night, but it only made sense that Fun Guy had the last laugh.

Let’s start with the numbers.

James scored just four points in the second half, while Davis managed seven in that timeframe and zero in the fourth quarter.

Overall, James had 18 points, nine rebounds, and eight assists, but shot 7-19 and finished with five turnovers.

Part of this can be attributed to the Clippers’ defence, but the Lakers’ two megastars clearly weren’t themselves in the second half after a promising beginning.

These guys need to get on Danny Green’s level.

While the Lakers clearly have the superstars to roll with the Clippers, they haven’t got the depth to match their Staples Center neighbours.

Well, certainly not with Kyle Kuzma and Rajon Rondo in street clothes.

Last night the Clippers outscored the Lakers 60-19 in bench scoring.

To be fair, that figure was a little misleading considering the Clippers brought several starting-quality players off the bench.

But those guys were spectacular nonetheless: Lou Williams scored 21 points (more on him later), Montrezl Harrell notched 17 points and seven rebounds on 7-11 shooting, while JaMychal Green and Maurice Harkless added 12 and 10 points respectively.

Kentavious Caldwell-Pope really set the tone when he registered zero points and five fouls in 27 minutes.

Not only did KCP bring nothing to the table, he squatted over the table and took a heaving dump on it.

Troy Daniels’ sole purpose is three-point shooting and he went 1-5 from distance, while Quinn Cook shot 2-7 from the field.

It’s impressive enough that Lou Williams has the testicular fortitude to take some of the shots he’s acquired a taste for over the years, let alone make them.

Dude is just deadly going left, but will gladly give you buckets in every way imaginable.

And despite the degree of difficulty of his shots, Williams’ 21 points came on 8-14 shooting.

Watching Lou-Will do his thing really is quite the experience.

Patrick Beverley is the dog, and LeBron James is the postman.

The Patrick Beverley/LeBron James matchup we didn’t know we’d have, but the one we need. pic.twitter.com/nwnGWDvC12

Beverley really is something else.

It’s like he’s paid according to the number of times he can make his opponent lose their cool and elbow him square in the head.

Beverley didn’t register a single steal last night, but his defensive impact was off the charts.

He went hard at LeBron right off the bat and maintained a level of intensity rarely seen among sane human beings.

He also pulled down 10 rebounds despite being the smallest guy on the floor.

This dude is all heart.