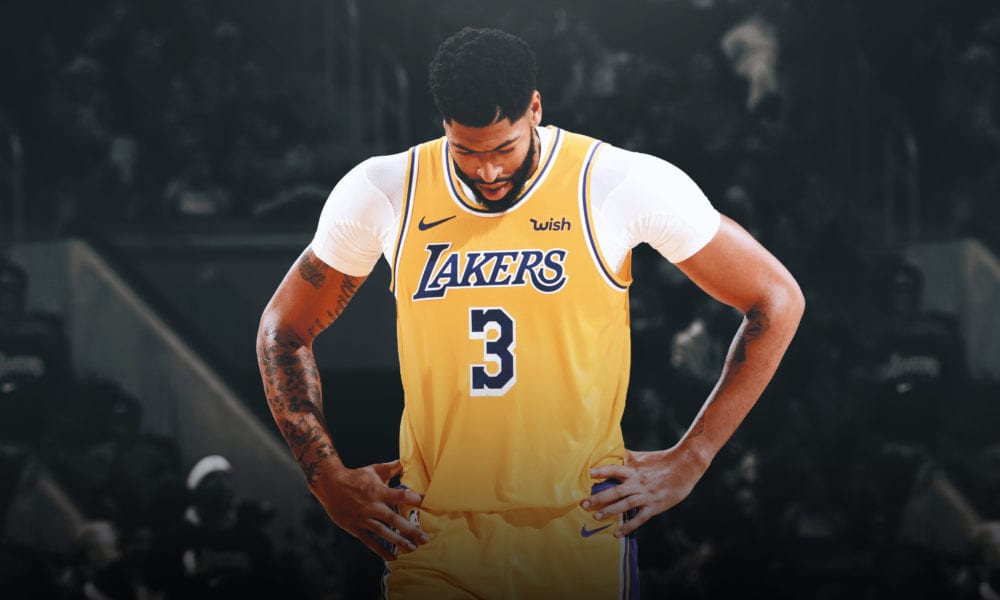 Both concern Anthony Davis, and both are dirty little secrets that Lakers fans don’t want to address.

The first is Davis’ injury history, and while this isn’t really a secret, it might as well be considering the way Laker Nation and the national media are glossing over the full extent of the issue.

A swift bust of mental arithmetic will tell you that’s almost six injuries per season, or one per month.

AD has the same kind of unpredictable “on again, off again” relationship with basketball that you had with your first high school girlfriend.

If that isn’t crazy enough for you, check out this list of every body part that Davis has ever injured:

Additionally, he has injured most of those body parts many times over.

It’s not just the sheer volume of injuries that’s concerning, but the way they have occurred.

Against the Nets on Saturday, Davis sprained his thumb on a regulation block attempt.

Previously, he left a game after diving into the crowd the same way hundreds of players have before him, sprained his groin despite barely moving or being touched and injured his knee while merely jostling for position in the post.

These are the sorts of things that only ever happen to Davis, a man who is as physically delicate as a newborn giraffe.

As I wrote back in May, it’s hard to build a team around Davis when he’s in and out of the lineup this much.

And in what other industry would it be acceptable for a company’s highest-paid (or second-highest paid) employee to suddenly and randomly be out of action six times a year, every year?

While Davis is rarely sidelined for long, his time in New Orleans shows that his absences are highly disruptive, both for himself and his team.

And when those absences are this alarmingly frequent, there’s always a good chance that at least one of them will arrive at a particularly problematic moment, like in a pivotal playoff game.

The Lakers better hope most of this can be blamed on the Pelicans’ training staff, because the only other explanation is that Davis has the most fragile body the NBA has ever seen.

When Davis entered the league in 2012, New Orleans coach Monty Williams insisted on playing his rail-thin rookie at power forward alongside a traditional center, the theory being that this would save AD from bruising battles with the league’s most imposing big men.

Since then, Davis has added 32 pounds, completely transforming his body to the point that now he is one of the most physically breathtaking bigs in the league, the kind of monster Williams originally shielded him from.

And yet, all these years later, Davis still hates playing the five.

Perhaps part of this is because he has formed an association between playing at center and getting injured.

But Davis has very clearly demonstrated that he’s going to suffer endless minor injuries regardless of position, and there’s no doubt the Lakers would be at their best with Davis at the five, LeBron at the four and Kyle Kuzma at the three.

It’s their most talented frontcourt lineup and their best option in terms of fit.

A lot has been made of how well Davis previously played alongside fellow big man DeMarcus Cousins, with Lakers general manager Rob Pelinka even trumpeting that point during Davis’ introductory press conference in July.

But Pelinka is conveniently ignoring the fact that Davis went nuclear the moment he shifted to the five in Boogie’s absence, ultimately powering the Pelicans past the Blazers in a first round sweep despite not even being favoured to win the series.

Part of that spike in form stemmed from AD making a conscious effort to carry the Pelicans after Boogie went down, but it was clear he was benefiting tremendously from all the newfound space that Cousins previously occupied, as was New Orleans’ entire system.

The Pelicans just looked immeasurably better with Davis at center and shooters surrounding him.

This is the pace and space era, and yet this past offseason Davis was using his sway with Lakers management to push for the signings of behemoths like Cousins, Dwight Howard and JaVale McGee, before fantasising aloud about massive lineups featuring two of those guys sharing the floor and presumably clogging the paint like it’s a suburban train station toilet.

This is one of many reasons why coaching decisions shouldn’t be left to players.

Sometimes they just don’t know what’s good for them.

Unfortunately, the Lakers have already caved to Davis’ demands.

“We’ve got to do what’s best for his body,” Pelinka said at Davis’ introductory presser.

“Having him bang against the biggest centers in the West every night is not what’s best for his body, the team, or the franchise.”

Who exactly are all these brutish centers, anyway?

This is a league littered with dynamic stretch fives, not bruising monsters like Shaquille O’Neal and Charles Oakley.

Davis moving away from the center position might be somewhat understandable on the rare occasion that LA faces a more traditional, forceful center like Andre Drummond.

But every other night?