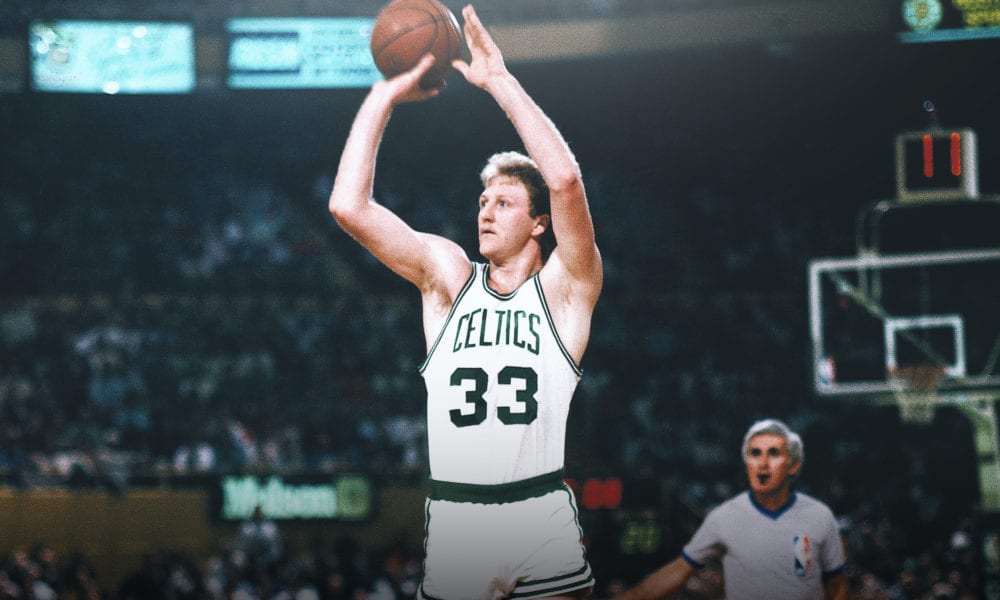 Larry Bird was as savage as they come.

No. 33 was every bit as good at talking trash as he was playing ball, and the stories of him doing just that are the stuff of legend.

For no reason other than our own amusement, we’re counting down Bird’s best trash talk moments.

Ahead of a Christmas Day game against the Celtics, Chuck Person – who’s nickname at the time was Rifleman – said he was about to go “bird hunting”. When Larry caught wind of Person’s comment, he said he had a present for the chatty Pacers forward, and he didn’t wait long before delivering it. After launching a three right in front of Person on Indiana’s bench, Bird turned to him while the ball was still in mid-air and growled “Merry f*cking Christmas” as the shot went in behind him.

Indiana made the grave mistake of assigning rookie George McCloud to guard Bird one night during the 1989-90 season. Bird promptly turned to the Pacers’ bench and said, “I know you guys are desperate, but can’t you find someone who at least has a prayer?”

When Bird played on the road, he was known for asking people what that arena’s scoring record was so that he could break it. Sometimes he would even ask his opponent, and when they questioned why he was asking them, Bird would say, “Well, you’re guarding me, aren’t you?”

Xavier McDaniel’s fiery run-in with Michael Jordan was well documented, but the X-man had a particularly memorable one with Bird too. And it didn’t end well for him. “I’m going to get the ball right here and I am going to shoot it right in your face,” Bird told him. He then received the ball, found the spot he’d pointed out, and hit the shot. “I didn’t mean to leave two seconds on the clock,” Bird told McDaniel on the way back down the floor.

Not everyone had the balls to challenge Bird, but Reggie Miller certainly did. When Miller tried to get into Bird’s head while he was at the free-throw line, the Celtics legend glared at him and said “Rook, I am the best f—ing shooter in the league. In the league, understand? And you’re up here trying to f—ing tell me something?”

One night in Dallas, Bird told the Mavericks bench exactly how he was going to score on the next play. “So you got that?” Bird said. “I’m gonna stand right here. I’m not going to move. They’ll pass me the ball, and the next sound you hear will be the ball hitting the bottom of the net.” The next time down the floor, Bird was true to his word, and winked at the Dallas bench afterwards for good measure.

When Bulls guard Craig Hodges won the 1990 Three-Point Contest, one reporter asked him if there would be an asterisk next to his victory because he didn’t go against Bird, who had won the first three contests. Hodges responded by saying, “He knows where to find me.” That comment was then passed onto Bird, who said, “Yeah, at the end of the Bulls’ bench.”

When Bird arrived at Chicago Stadium to defend his back-to-back three-point titles in 1988, he looked around the locker room and asked, “So, who’s coming in second?” Naturally, Bird backed up his trash talk and won the contest for the third year in a row.

Even Dennis Rodman, one of the greatest defenders of all-time, was not immune to a classic Larry roasting. As a member of the Pistons early in his career, Rodman was guarding Bird when he scored four consecutive baskets on him. Bird then started yelling at Rodman’s coach Chuck Daly. “Who’s guarding me, Chuck? Is anyone guarding me? You better get someone on me or I’m gonna go for 60!” Even when Rodman was draped all over Bird in an effort to deny him the ball, Bird was still yelling. “I’m open! Hurry up before they notice nobody is guarding me!”

Bird was in peak f*ck you mode when the Celtics travelled to play the Hawks late in the 1984-85 regular season.

He poured in a career high (and Celtics record) 60 points, and incredibly, that wasn’t even the story that stands out in the minds of the players who were there that night.

Neither was the fact that he’d run a five-mile charity race two days earlier and may even have been hungover, according to an Oral History from Boston.com (Bird denies it).

The most memorable moment came when Bird, already white hot at this stage, cruised down the court and said “in the trainer’s lap — who wants it?”

By that, he meant he was going to hit a deep three right in some poor sucker’s face.

The rest of this story is best told by Doc Rivers.

“I think Rickey Brown, I’m not sure who it was, ran out after him,” Rivers told Boston.com. “He shot this high rainbow, it goes in, Rickey bumps into him — and accidentally knocks him on our trainer’s lap. So it was exactly what he said, it was an accident but it was almost fate.”

It was such a mind-blowing play that cameras even captured Atlanta’s Cliff Levingston and Eddie Johnson frantically leaping to their feet and celebrating on the Hawks bench.