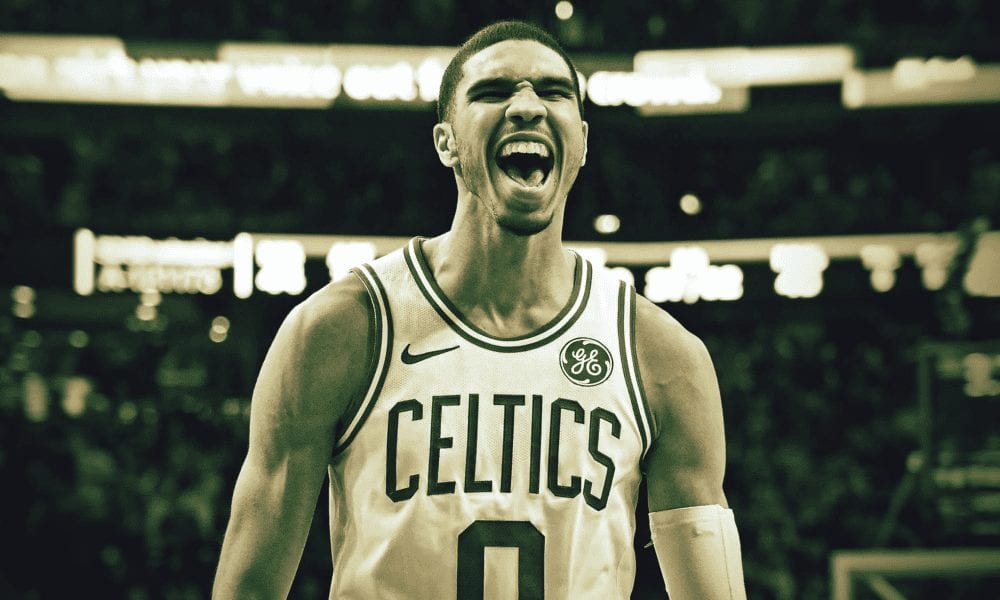 Jayson Tatum hears all the noise.

First the talking heads said his sophomore season was a disappointment.

Then they said the Celtics were irreparably broken.

The narrative later shifted to Team USA’s squad being one of the worst of all-time.

But Tatum is an unflappable character.

He remains fiercely unflinching as he sets out to prove the doubters wrong on all fronts.

But before he embarks on that challenge, he has taken some time out to chat with Basketball Forever about overcoming the doubters, the weight of expectations, changes to his game, and hanging out with Michael Jordan.

Last year didn’t go according to plan in Boston, so what’s going to set this upcoming Celtics team apart from the one we’ve just seen?

We got a new team, we got seven people left from last year, we’ve got a bunch of new guys. Just trying to put last year behind us and have a better season.

After having such an incredible rookie season, how did you deal with those expectations heading into the following year?

With the expectations so high in your second year, did you hear much of that negative talk?

Yeah, but I’ve never been phased when people talk down on you, or even when they talk good about you, it’s not what I’m in it for.

Do you try to stay away from social media to avoid that kind of negativity?

Everybody’s different. It bothers some people more than others. For me, I’m such a laid-back guy that what people say doesn’t really bother me. Especially because it’s like, ‘I don’t know you’. Everybody has an opinion and everybody is entitled to an opinion.

What was the biggest lesson you learnt back in your rookie year?

Just staying healthy and taking care of your body. It’s a long season, just learning from the older players and how they take care of their body.

What lessons did you learn off the court?

Financial things, marketing things, building your brand, stuff like that.

What parts of your game did you work on over the offseason?

Just a mindset thing, being able to attack more and shoot more threes.

After working out with Kobe last summer, what similarities do you see between yourself and him?

Just the desire to be great at what you do. That mentality can be for anything in life.

Going from idolising Kobe as a kid to working out with him, it must have been kind of surreal right?

Yeah, I was in shock because he’s the reason I started playing, he was always my favourite player.

I’ve got to ask about that dunk on LeBron. What was going through your mind, and when you bumped chests with him, what happened there?

I dunked it and I was just so excited and caught up in the moment… I chest bumped him… and it was like an out of body experience. It’s something I’ll always remember.

Was the chest bump intentional?

Yeah, but something came over me that made me do it, because that’s not really what I do.

What was your impression of the Australian team when you played them and which Aussie players are the most dangerous in your eyes?

I’ve played against, I wanna say… half those guys. I played with Baynes for two years [and played against] Ingles, Patty Mills, Andrew Bogut. Most dangerous? They all play so well together, they’ve been playing with each other for a long time, so for them it’s not so much a one-man show or a one-person thing, it’s a team aspect that they’re really good at.

What made you want to play for Team USA when just about everyone else was dropping out?

I was on that first list of guys that got invited. And then obviously guys on that list were dropping out. But for me, so early in my career, I’m just grateful for the opportunity, so I wasn’t going to turn this down.

Who’s the most fun guy to be around on Team USA?

Man, it’s hard. Everybody on the team is a character, we got some funny guys on this team. Even Mason Plumlee, he got all the jokes. Joe Harris, he’s always got great energy and a smile on his face and making guys laugh.

Everyone on Team USA had a lot of fun with Kuzma [before he got hurt], what were your thoughts on all that?

I know for sure that there’s a group chat going on right now, surely you guys were roasting Kuz in there?

That’s confidential. I can’t give out that secret information.

What did signing with Jordan Brand mean to you and what was it like to chat with MJ?

It was surreal, that’s the greatest player ever. Just being on that team and coming over to the brand is exciting.

We had a long talk, I got to spend some time with him in Paris. We just got to have fun, some downtime, relax, enjoy the scenery and the city… we had a good time.

Jayson, thanks for your time.