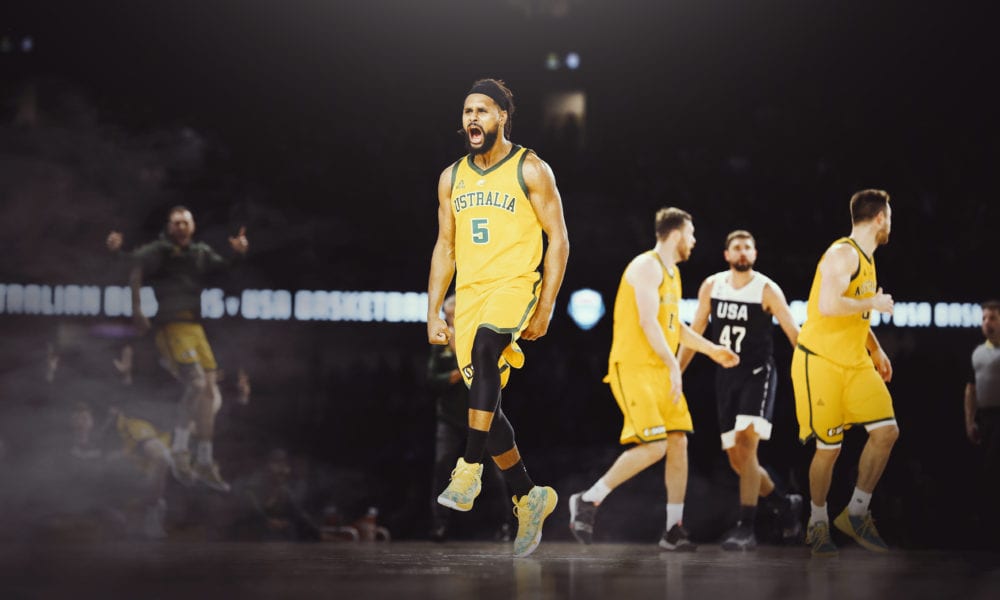 Australia has beaten Team USA for the first time ever, snapping the Americans’ 78-game winning streak and sending a record crowd of 52,000 into raptures at Melbourne’s Marvel Stadium on Saturday.

So as the dust settles on the Boomers’ stunning win, let’s take a look at some of the key factors which contributed to it.

The Boomers struggled to generate much of an atmosphere during most of their two-game exhibition, but Patty Mills changed that in an instant with a Game 2 offensive outburst so explosive it transformed the place from a library into a madhouse.

Mills, who finished with a game-high 30 points, scored Australia’s last 10 points as he shredded the American defence and hit big shot after big shot.

This is a man who was built for the big moments, and there has never been a bigger basketball moment on Australian soil than this one.

Gregg Popovich summed it up best after the game when he quipped, “Like I said last game, Patty’s a pain in the ass.”

One of the many things that makes any Team USA squad so dangerous is the effortlessness with which they score.

But with a smarter approach and a little of their trademark grit, the Boomers made life a whole lot harder for the Americans on Saturday.

While Matthew Dellavedova’s trademark hustle plays and Andrew Bogut’s rim protection are always hard to miss, it was the increased cohesiveness of Australia’s collective defensive forces which ultimately got the job done.

Contesting more of those mid-range shots which torched them in the first game was crucial, while Andrej Lemanis’s full court press – spearheaded by the previously maligned Nick Kay – turned the game on its head in the second half.

One of Bogut’s most redeeming qualities is his ability to contribute in all areas of the game and he did exactly that on Saturday, finishing with 16 points, nine rebounds and four assists.

Scoring has never been at the top of Bogut’s job description but his sudden appetite for buckets provided a tremendous boost for the Aussies on Saturday, as the big fella peppered the USA defence with lefty hooks and three-point plays (sometimes doing both at the same time).

Bogut really does look to be rejuvenated and in great shape after making the switch from the NBA to the NBL that his body so desperately needed, and it’s making all the difference for the Boomers.

In the first instalment of this two-part series, it all fell apart for the Boomers early in the third quarter.

On that night, the Aussies trailed by just one at half-time but stumbled out of the gates to start the third and found themselves down by 12 within the blink of an eye.

It felt like more of the same was on its way in Game 2 with Australia down 65-56 mid third quarter after again being down by just one at the half, and the audible tightening of sphincters around Marvel Stadium suggested everyone in attendance was thinking the same thing.

The Boomers had just allowed both Kemba Walker and Khris Middleton to get to the basket for lay-ups, before fouling Walker beyond the three-point line to gift him additional easy points.

Things certainly weren’t looking promising in that moment, but this time around the Boomers fought back with Ingles and Bogut scoring and moving the ball exceptionally, and in the process setting the stage for Mills to unleash hell and seal the deal.

Related Article:  RJ Hampton Discusses Surprise DM From Kyrie Irving And Why He Has Zero Regrets About Skipping College