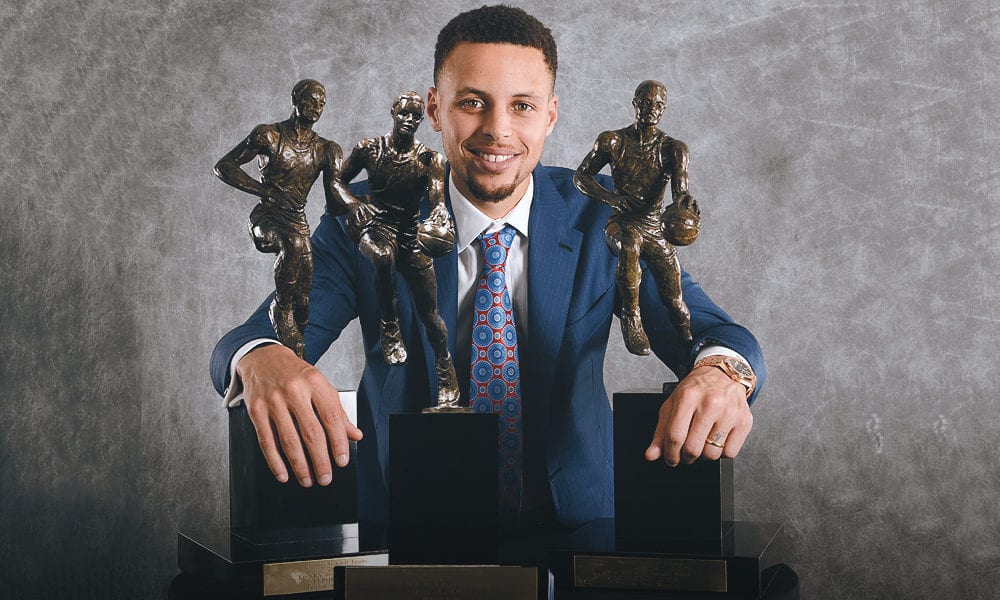 It’s never too early to look towards next season, especially when there’s absolutely nothing going on.

Hell, the only major event on the NBA calendar this month is Taco Tuesdays and things are so dire that SB Nation is writing stories about SpongeBob.

Even the biggest news lately has been about basketball players choosing not to play basketball.

Anyway, in order to numb the pain/boredom, let’s jump into some way-too-early predictions for the NBA awards (that will then be handed out way too late).

That means we have excluded Most Improved Player and Sixth Man of the Year, because honestly, they matter about as much a division championship banners.

Giannis Antetokounmpo will be up against voter fatigue after winning last season, James Harden will have to share the ball with Russell Westbrook and Kawhi Leonard will load manage his way out of 15-20 games.

Steph Curry, on the other hand, is looking like a very enticing candidate, the most obvious reason being that he will no longer have to share the spotlight with Kevin Durant.

The last two seasons he played without Durant, the trophy was his.

And much like the Warriors as a whole, Curry is at his deadliest when everyone is counting him out and in the process providing him with all the motivation he spent the past few years trying to find.

Rookie of the Year – Zion Williamson

In some corners of the internet there’s a belief that Ja Morant will win this award.

And sure, Morant will have every opportunity to put up numbers in Memphis, and with significantly less pressure than Zion Williamson and RJ Barrett will encounter by virtue of being the number one pick and playing in New York respectively.

There’s also the undeniable fact that Williamson arrived in New Orleans carrying a few extra pounds, before he even had a chance to load up on shrimp gumbo.

But what got far less media attention was Williamson working himself into shape soon after looking a touch chunky at Summer League (it also can’t hurt that the Pelicans hired the ringleader of the Suns’ famous miracle-working training staff).

Don’t overthink this one, Williamson’s talent, body and athleticism are unrivalled among his first-year peers.

No one is stopping him from winning Rookie of the Year.

This award is Rudy Gobert’s to lose at this point.

Previous winners Draymond Green and Kawhi Leonard don’t quite pose the same threats they used to, thanks to Green’s dramatic ups and downs and Leonard strategically sitting out games.

Gobert’s defensive impact is unmatched and Utah’s defence is based around funnelling enemy forces his way.

Also helping his cause is the fact that voter fatigue doesn’t seem to apply to DPOTY like it does with MVP.

Coach of the Year – Quin Snyder

The Jazz are poised to make a major leap now that they’ve added some offensive firepower to an already elite defensive squad and a lot of the credit is likely to come Snyder’s way, especially considering the Jazz don’t have an A-list superstar.

Elsewhere around the league, Mike Malone is always a threat but Mike Budenholzer isn’t after already being recognised for transforming the Bucks last season.

Doc Rivers, who probably still can’t believe he didn’t win the award last year, will have his candidacy set back by having two superstars.