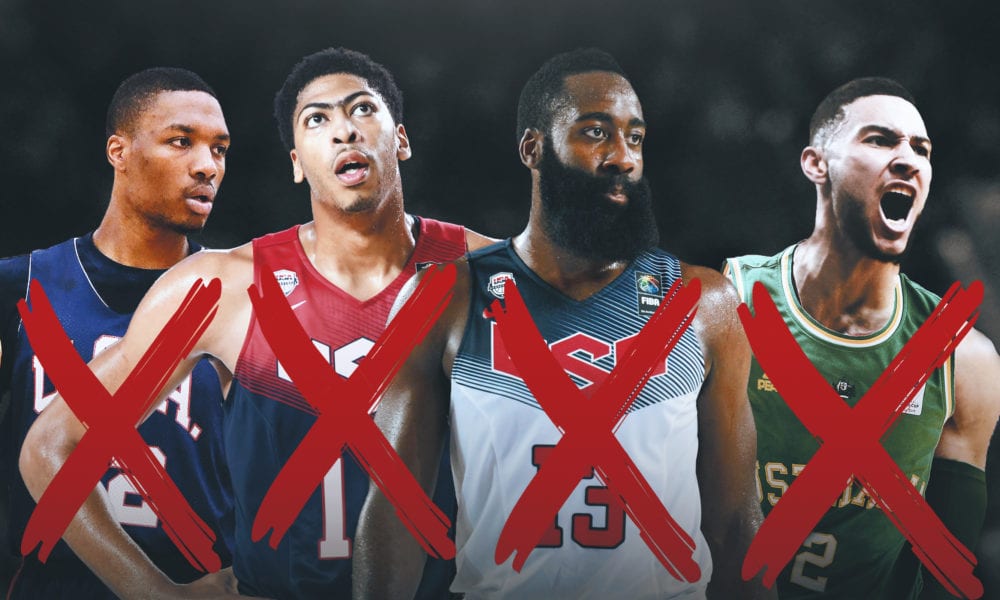 For more than 12 months, the promotional material surrounding Australia’s upcoming games against Team USA suggested many of the NBA’s biggest stars were heading Down Under.

Ticketmaster and event promoter TEG pumped out ads featuring everyone from Kevin Durant to Paul George as recently as last week, conveniently glossing over Durant rupturing his Achilles and George never being part of Team USA’s extended squad in the first place.

Images of James Harden and Anthony Davis were also splashed everywhere, weeks after they had both withdrawn their names from international competition.

After a solid year of dizzying promotions and raised expectations, it turned out the Americans were bringing the least talented squad they had ever assembled ahead of a major tournament, prompting an uproar across Australia and a chorus of voices calling for refunds.

However, you might not be shocked to learn that no one with a stake in this almighty cash cow plans to give a single cent back.

Just take a look at Ticketmaster’s response to one fan’s refund request, which he subsequently labelled “comedy central” when sharing it on Twitter.

“The teams who will play at the Marvel Stadium games in Melbourne comprise of the very best basketball athletes from each of Australia and the United States,” the Ticketmaster representative said. “Like any team sport, injuries, suspensions, team balance and form play a part in determining the final squads. We are very excited that these games will feature the strongest USA Team ever to play in Australia and they will face the strongest ever Boomers team.”

The company’s response was clearly a stretch, and that’s being extremely kind.

Basketball Forever contacted both Ticketmaster and TEG, seeking clarification on whether even partial refunds would be considered, or the reduction of prices for remaining tickets.

But Ticketmaster declined to comment and referred us to TEG, while TEG failed to respond to multiple media requests.

As it stands, the cheapest available nosebleed seats are still selling for between $200 and $300, according to Ticketmaster’s website.

This is on top of the deceptive sales practices that were evident to many from the very start.

Not long after the games were announced in March last year, expensive packages naturally went on sale before regular tickets.

The most affordable one was called the MVP Fan Package, which supposedly came with one “gold category ticket” and cost just under $300.

The packages quickly sold out, thanks to a long line of fans desperate not to miss out.

But the exact seat locations weren’t revealed until months later, meaning punters had to purchase with blind faith and simply hope they were getting a fair deal.

And guess what… they were not.

As numerous fans have since pointed out on social media, these seats were eventually revealed to be right towards the back.

That’s not exactly what anyone would expect from “gold category” tickets included in an “MVP package”.

If nosebleeds are now the gold standard, silver tickets presumably just get you a deck chair in front of the big screen outside the stadium.

If all this wasn’t enough, it turned out the gold category seats were right next to other seats which became available for much less as soon as individual tickets went on sale.

If the promoters responded to our media requests, they would have likely argued that fans aren’t just paying for a ticket, they’re paying for a package.

But all that’s included in the package, other than a ticket, is the promise of an unspecified “merchandise item” and a lanyard.

Hilariously, even the lanyard appears to be off the table now due to “security concerns”, and has been replaced with a “commemorative ticket” (whatever that means).

Combine these sorts of blatant rip-offs with the lack of refunds and continued withdrawals of Team USA’s best talent, and the only hope for ticket holders now is that the remaining players at least make this headache worthwhile.

Related Article:  The Worst Part Of Team USA’s History Is Repeating Itself
-->