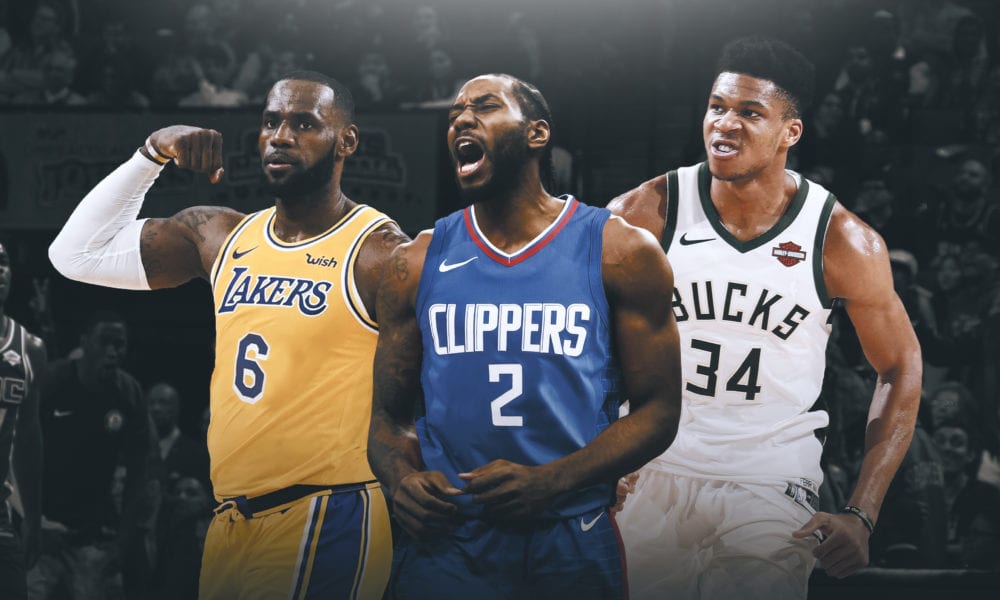 Never before has one free agency period spiced up the NBA quite like this.

The entire landscape of the league has changed, and instead of one clear-cut contender standing head and shoulders above the rest, we now have seven of them.

Let’s take an early look at each one.

The Jazz are still considered by some to be a sexy outside tip for title contention, but this team will quickly become too good to be considered an edgy pick reserved for basketball hipsters.

Utah has added some serious offensive firepower to what was already the league’s second-best defensive team, with Mike Conley and Bojan Bogdanovic arriving in Salt Lake City this summer.

Meanwhile, expect Donovan Mitchell to take things to another level with the luxury of having another playmaker alongside him.

The Jazz project to be a top-10 team on both sides of the ball and an absolute handful for whichever teams they face in the postseason.

With Kevin Durant in Brooklyn and Klay Thompson in crutches, it would be very easy to forget about the Warriors.

But this is not a squad you want to sleep on.

Steph Curry figures to be a top-three MVP candidate now that he no longer has to share the spotlight with Durant, D’Angelo Russel will find a way to be excellent despite a less-than-seamless fit, Draymond Green has still got it after entering a purple patch at the end of last season and Klay Thompson will likely return to the court before the playoffs begin.

Then there’s Kevon Looney – who is worth at least double the $5M per year Golden State are paying him – and free agent signings Willie Cauley-Stein and Alec Burks.

And remember, the Warriors love nothing more than being counted out.

They are at their absolute best when they have something to prove.

It’s a troubling and inconvenient truth, but we haven’t seen the end of the Warriors just yet.

Until recently, all the Rockets had done with their offseason was re-sign Austin Rivers and miss out on Jimmy Butler.

Then they went out and pulled off a blockbuster trade for Russell Westbrook, reuniting both Beard and Brodie.

There are plenty of signs which suggest this could actually work, including Westbrook’s increased willingness to defer last season, Mike D’Antoni utilising his players’ offensive abilities far better than Billy Donovan, the likelihood that Houston’s system at least reduces the number of awful two-point jumpers Westbrook takes, and the fact Russ will finally be surrounded by shooters.

Of course, there are plenty of obvious ways things could go wrong too, which leaves the Rockets with the greatest distance between floor and ceiling of any contender heading into the season.

Philadelphia’s bench is thin, their best shooter (JJ Redick) is gone and the ever-clutch Jimmy Butler has taken his talents to South Beach.

But everything else is looking extremely promising for the Sixers.

The Simmons/Richardson/Harris/Embiid/Horford starting five is one of the most promising in the league and the pieces fit much better than they did last season.

Richardson is as smart as he is electric, while Horford is a beast defensively and his unique ability to put the clamps on Giannis could prove invaluable with the Sixers and Bucks a strong chance to meet in the conference finals.

The biggest question for Philly is whether Ben Simmons can play like superstar in the playoffs.

Butler effectively played point guard for long stretches last postseason but the Sixers no longer have that safety net.

If Simmons gets over that hump, this team could absolutely win the title.

After all, they were only a couple of wild Kawhi Leonard game-winners from beating the eventual champions last year.

The Bucks finished with the best record in the league last season and the addition of Thanasis Antetokounmpo should really put them over the top (not really).

The good news is they managed to keep everyone except for Malcolm Brogdon and Nikola Mirotic, while adding Robin Lopez for both defensive and meme-based purposes.

They might not have as much talent as some other teams in the league but every piece fits perfectly with Giannis Antetokounmpo, and with each other.

The only team in the East that should be able to hold a candle to Milwaukee is Philadelphia.

On one hand, LeBron James is pushing 35, Anthony Davis is the most injury-prone man alive and the Lakers’ lack serious depth with Kyle Kuzma and Danny Green currently their third and fourth-best players.

On the other hand, they have two of the seven best players in the league and James is primed for a bounce back season after soaking up close to six months of rest for the first time in nine years.

Keeping their powder dry while they waited for Kawhi Leonard certainly didn’t help the Lakers’ cause in free agency, but they at least followed up by signing Danny Green.

Green is one of the most valuable three-and-D players in the league, and three-point shooting and defence were both sorely lacking for this squad last season.

The Lakers definitely have the makings of something special.

The question will be whether the players not named James, Davis, Green or Kuzma can provide the support required to win it all.

Having completed one of the most unforgettable heists in the history of free agency, the Clippers now have the reigning Finals MVP and a top-three MVP vote-getter from last season.

Kawhi Leonard and Paul George are also the best defensive duo in the league, and will absolutely terrorise teams on both ends.

Their versatility and interchangeability make them even more valuable in modern NBA, while also allowing each of them the rest they need during the regular season.

Better still, they are joining an already rock-solid team that not only made the postseason last year, but pinched two playoff games at Oracle as well.

The Clippers have masterfully established a genuine championship core, and the rest of the league has been put on notice.

Related Article:  In Defence Of Houston's Trade For Russell Westbrook
-->