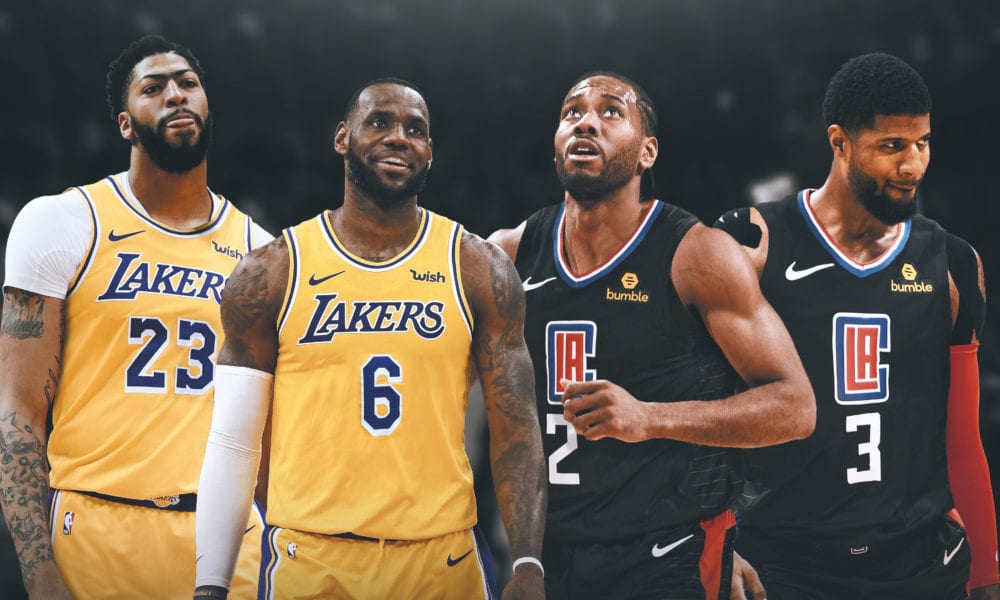 Life comes at you fast, especially if you’re a fan of an LA-based professional basketball franchise.

The Lakers were better than the Clippers for all of two weeks, and then Kawhi Leonard happened.

LA’s less glamourous team has since overtaken their more successful older brothers to have the shortest odds to win the title.

And if you have any lingering doubts that the Clippers will be better than the Lakers, prepare to have them erased right now.

LeBron James, Anthony Davis and Danny Green is a great start, but the Lakers aren’t getting much D out of anyone else.

Not only is the defensive tandem of Leonard and George better than James and Davis, it’s the best defensive duo in the league.

Those two playing together is the stuff defensive coaches dream of, and it’s nightmare fuel for everyone else.

Beyond James, Davis, Green and Kyle Kuzma, who else do the Lakers have that inspires any sort of inspiration?

The best they have after that is JaVale McGee, Quinn Cook and the ghost of DeMarcus Cousins.

That’s what happens when your primary offseason target has you holding onto your precious cap space for days during the fast moving free agency period in recent memory.

Every Clipper can be trusted, every Laker cannot

Not only are the Clippers more talented, they also have many more reliable players.

DeMarcus Cousins was a train wreck for most of the Finals.

Trusting those guys to come through in the playoffs is like trusting your five-year-old nephew to manage your mortgage repayments.

The Clippers have an edge to them

Even before landing Leonard and George, this Clippers team was hard-nosed and gritty as hell.

And despite sacrificing a barrel load of assets to acquire George, they have kept the guys who were the driving force behind their trademark nastiness (namely Patrick Beverley and Montrezl Harrell).

The Clippers were good even before they got their stars

The Lakers finished last season 11 games out of the eighth seed, while the Clippers made the playoffs and took the Warriors to six games in round one.

The Lakers had one superstar, the Clippers had zero.

The Clips have since taken the core of a team that made significant postseason noise in the brutal West, and added two bona fide stars.

That’s going to be a serious problem for the Lakers, not to mention everyone else.