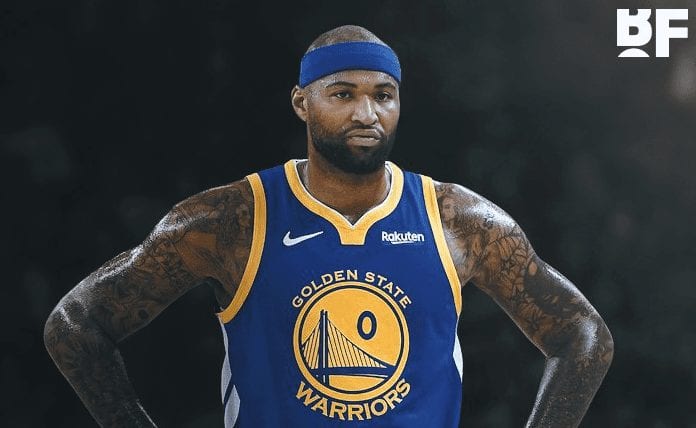 When DeMarcus Cousins first tore his Achilles, there was still hope.

There was a path back to relevance, a plan that he could focus on.

That plan was to spend a season showcasing his game with the Warriors, use the national spotlight to convince teams he could still play, finally earn his big pay check the following year, and collect a ring in the process.

Of course, like with so many well-laid plans, things went awry.

Less than three months after returning from his Achilles injury, Cousins tore his quad, right as the playoffs were starting.

He returned just in time for the Finals, but outside of a strong showing in Game 2, he was completely out of sorts.

His supposedly guaranteed ring never arrived, and neither did his payday.

Earlier this week, Adrian Wojnarowski went on SportsCenter and reported there is currently “no market” for Cousins at all.

Even the Knicks aren’t desperate enough to sign him.

Teams have cottoned on to the fact that post-injury Cousins is likely to bring 100% of the drama with about 40% of the production.

Much like Isaiah Thomas before him, Boogie may now go his entire career without ever landing his big payday.

The only contracts Cousins has ever signed are his rookie deal and his four-year, $65.6M rookie scale extension.

For context, Terry freaking Rozier is now about to earn a shade under $60M, and in three years instead of four.

The NBA’s salary boom is passing Cousins by.

It feels like a lifetime ago now, but remember, Cousins was putting up 25, 13 and 5 right before his Achilles gave way.

Had he never suffered that injury, he would have netted a deal somewhere in the range of $120M-$140M last summer, just like Paul George, Chris Paul and Nikola Jokic did.

Cousins probably could have commanded another similar deal after that too, meaning he could be missing out on a total of $240M or more.

And just to rub salt into the wounds, Cousins had the chance to at least salvage $40M with the two-year deal the Pelicans offered him after his injury last summer.

But he knocked it back, believing he could work his way back towards max money.

It was a gamble which backfired spectacularly.

And with hardly anyone ever able to properly recover from an Achilles tear, the season just gone won’t be the last time Cousins has to settle for a modest contract.

In fact, it will likely become his new normal.