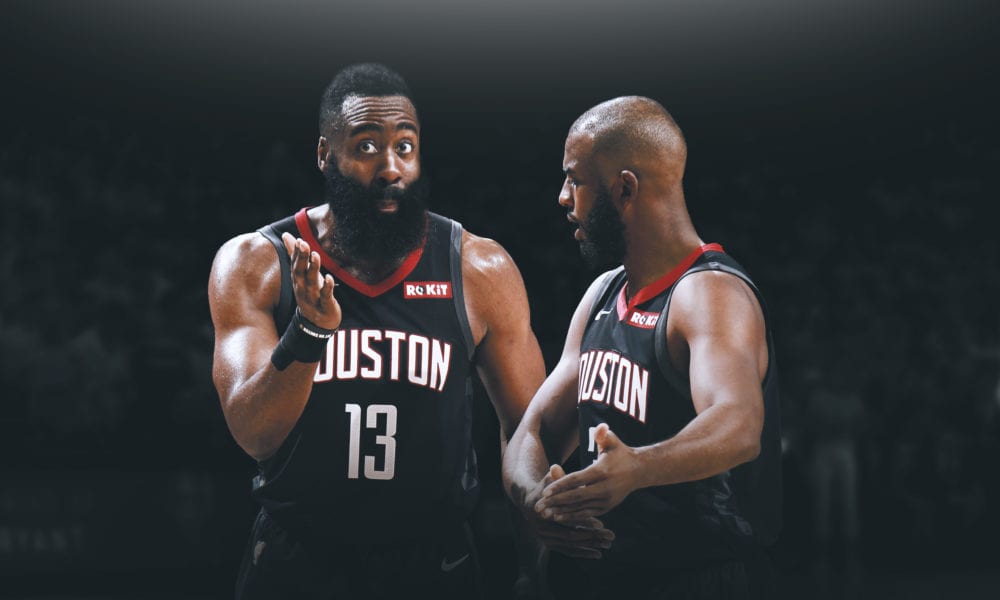 With Golden State effectively vacating the 2020 title race, this should be Houston’s time.

Instead, things are falling apart for the Rockets at the worst possible moment.

Houston was already dealing with problematic contract negotiations with Mike D’Antoni, but now they’re faced with a much bigger problem: Chris Paul and James Harden are at each other’s throats.

From all reports, things are bad.

Their relationship is “unsalvageable” according to Yahoo Sports’ Vincent Goodwill, who also reported that Paul had demanded a trade, while Harden had issued a “him or me” ultimatum to team management.

Furthermore, the report claimed the two stars hadn’t spoken to each other for almost two months during the season, causing more friction that a sumo wrestler’s thighs on a lengthy hike.

But what actually led to all of this?

Well, we have at least some of the answers.

Remember when Harden had some kind of cultural aversion to defence?

He thinks Harden has no interest in the less glamorous aspects of the game, moving without the ball being one example.

Paul has always been like a coach on the floor.

Well, he’s more like one of those tiny dogs that gets carried everywhere in a handbag and never stops yapping, but let’s roll with the coaching comparison for now.

But here’s the problem with telling everyone what to do…

There comes a time when everyone’s tolerance wears thin, and they eventually snap.

It certainly doesn’t help that The Beard is in his absolute prime, while the guy telling him what to do is much closer to 36 years of age than points per game.

“James looks at him like, ‘You can’t even beat your man. Just shut up and watch me’,” on source told ESPN.

Now what? Is someone about to get traded?

Not according to Rockets general manager Daryl Morey.

Morey has denied there’s a problem at all, suggesting everyone at the Rockets is equally frustrated after losing to the Warriors once again.

But there’s too much smoke for there to be no fire.

Morey also went on local radio this week and told host Sean Salisbury he wouldn’t be taking calls for Paul.

However, he’d previously made it clear that everyone was on the table.

Chances are that’s still the case, with his latest comment likely designed to increase leverage in any forthcoming trade negotiations.

But that still doesn’t mean a trade is necessarily inevitable.

For starters, Paul’s contract is as close to untradeable as it gets.

And bear in mind that NBA “beefs” are rarely as bad as they seem at first.

Remember when we all thought the Kevin Durant-Draymond Green spat would be the end of the Warriors?

We haven’t reached the final chapter of this story just yet.

Harden and Paul still have time to patch things up.