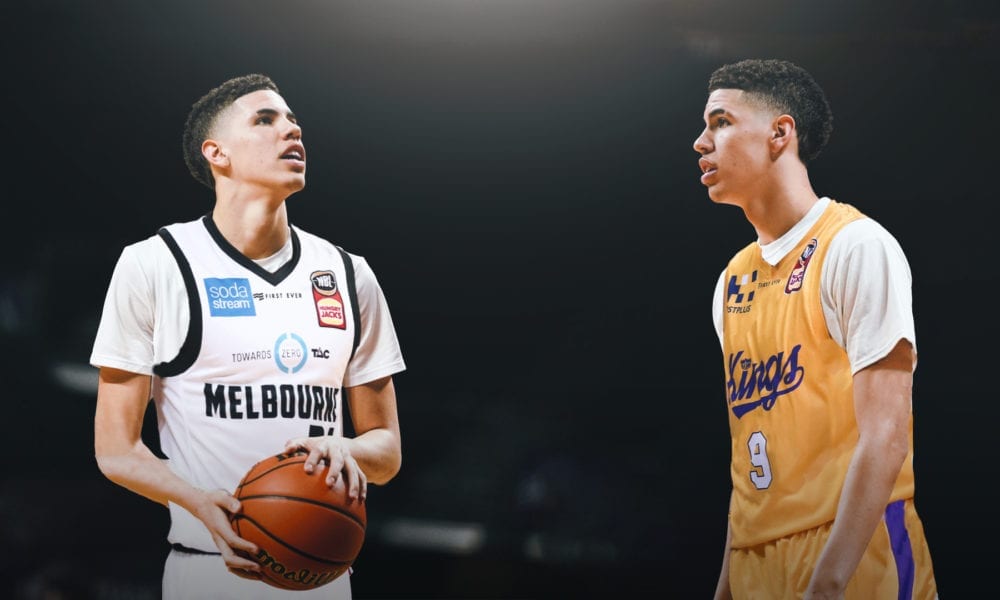 The NBL needs to put its money where its mouth is and show the world it’s serious about putting Australian basketball on the map.

The league has been handed an opportunity so golden that squandering it would be criminal.

LaMelo Ball, one of the most recognisable and electric players in the game, has repeatedly suggested that he wants to play in Australia.

It’s not a rumour, it’s not whispers, he openly and blatantly wants to make it happen.

Now the NBL needs to act like the league it professes to be and get this thing done.

Remember, the league has spent years carefully positioning itself as a destination for future NBA players.

They have created the environment that enabled this opportunity.

And if there’s any remaining doubt that LaMelo and his people are serious, just know this: Basketball Forever has been told Melo’s management reached out to a former NBL import for some thoughts on what it’s like playing pro basketball in Australia.

Never before has the league encountered a marketing opportunity of such magnitude, and this one has arrived on a silver platter.

It’s time for the NBL’s two biggest markets, Sydney and Melbourne, to go for it.

Just imagine… the NBL and whichever team won his services would become a regular fixture on SportsCenter overnight, not to mention Ball in the Family and every major sports news service.

We’re talking about an audience of hundreds of millions… Australia’s population many times over.

To top it off, Melo’s social media following is larger than that of the NBL, all its teams, and all its players combined.

It just cannot be overstated how well situated the NBL is in the race for Melo.

We’ve known this ever since LaVar Ball declared his son would either play in Australia or China.

LaMelo has been very vocal about how much he hated life in Lithuania, and China poses all the same problems.

Especially culture shock and a language barrier, neither of which are easy to digest as a 17-year-old, and a tough hurdle when trying to develop into an NBA level talent as quickly as possible.

In stark contrast, Australia would allow him to live his comfortable and familiar LA lifestyle.

And instead of struggling to develop under a Lithuanian coach who doubles as a drill sergeant, Melo would be learning from Will Weaver or Dean Vickerman, two of the brightest coaching minds in the country.

LaMelo wouldn’t solely be a media opportunity either.

He is a genuine hooper, a rare talent capable of big things.

Just ask Richard Mason, an opposing coach who caught Melo in the flesh during his recent stint at Spire Institute.

“There’s not a player in America better than that kid,” he told Forbes.

“He’s better than his older brother.”

At just 17-years-old, he already has pro experience, setting him apart from RJ Hampton and every NBA prospect that’s ever ventured Down Under.

As a 6’6 point guard with elite vision and eye-popping range, not only is he ready to contribute right now, he is a box office event.

In 12 months time, LaMelo will be an NBA player.

Any notion that he wouldn’t be a worthwhile NBL signing is ridiculous.

Every team but one passed on RJ Hampton last month and a similarly lukewarm response to LaMelo’s availability would be madness.

And before you bring up the LaVar factor, I’ve got news for you.

He has mellowed out.

His whole demeanour has changed.

Sure, he’s still crazy enough to suggest LiAngelo is an NBA calibre player.

But the only eyebrow raising thing he’s said lately – claiming Magic Johnson and Luke Walton were on their way out of the Lakers – turned out to be bang on the money a few months later.

Any level of LaVar paranoia is hardly a legitimate reason not to pull the trigger on what would be a game-changing move.

Surely an outspoken parent isn’t all it takes to derail the plans of a league that’s gunning for that number two spot.

But if Sydney want to prove that they really are the powerbrokers of Australian basketball, they have to step up to the plate right now.

And if there was ever a man hellbent on making history twice in two seasons and beating Melbourne to the punch both times – first to Bogut, then to LaMelo – it’s Paul Smith.

Imagine taking a current Golden State Warrior, putting him in the NBL and pairing him with one of the best point guard prospects in the world.

That is the opportunity the Kings have in front of them.

No one in NBL circles could believe that Bogut was really coming last year.

So picture the splash Sydney would make if they put LaMelo next to him.

And with rumors circulating that Illawarra could be in play, surely the Kings won’t lose this race to their small town rivals down the road.

Sydney is the team that considers itself the league’s landing spot for superstars, and only a big market team like the Kings can truly maximise the LaMelo frenzy.

But if Sydney isn’t up to the task, Melbourne needs to pounce.

They play in the league’s only other major market, and while they’re yet to join the league-wide trend of signing future NBA players, what better time to start?

Helping Melbourne’s case is their coach.

Dean Vickerman has a proven track record of getting the most out of his players by putting them in positions to succeed.

If anyone can turn LaMelo into a formidable NBL weapon, it’s him.

The NBL, meanwhile, markets itself as a genuine global player and a legitimate destination for NBA-level talent.

Their social media presence suggests no one is enjoying the LaMelo speculation more than the league itself.

But the time has come to stop merely using the Melo rumour mill for social media traction (yes, that’s a bit rich coming from BF) and turn those rumours into reality.

Terrance Ferguson, Brian Bowen and RJ Hampton have all landed here recently, but this is the NBL’s chance to truly cement themselves as a destination for the global stars of tomorrow.

If the NBL is serious about being the second-best league in the world, if they’re truly committed to establishing a global footprint, they need to chase LaMelo now and chase him hard.

Related Article:  DeMar DeRozan Is Pissed Off With Jimmy Kimmel
-->